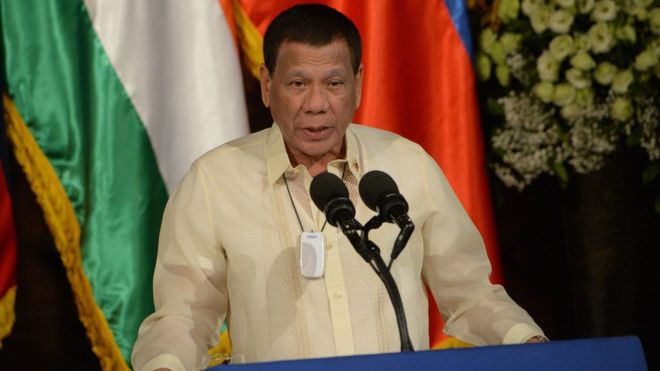 Thousands of people have been killed amid "near impunity" for offenders in the war the Philippines has waged on illegal drugs since 2016, the UN says.

His drugs crackdown has been marked by high-level rhetoric that can be seen as "permission to kill", the report said, urging an independent investigation.

The administration has in the past rejected all criticism of its policies and denies the killings are illegal.

Official figures show more than 8,000 people were killed in the war on drugs since Mr Duterte took office in 2016. Other estimates put the figure three times as high.

The report found that most victims are young poor urban males and that police, who do not need search or arrest warrants to conduct house raids, systematically force suspects to make self-incriminating statements or risk facing lethal force.

What does the report say?
The 26-page report, prepared by Michelle Bachelet, the United Nation's High Commissioner for Human Rights, examined nearly 900 written submissions from human rights defenders, journalists, trade unionists and the Duterte administration.
In one section, the report said the police's key policy note contained "ominous" and "ill-defined language" such as "neutralising" suspects, and that coupled with "rhetoric at high levels calling for the killings of drug offenders", it was taken as a permission by the police to kill.

"In the context of the campaign against illegal drugs, there has been near impunity for such violations."

According to the UN, statements from the highest levels of government had "risen to the level of incitement to violence" and "vilification of dissent is being increasingly institutionalised."

The report suggests that "the human rights situation in the Philippines is marked by an overarching focus on public order and national security, including countering terrorism and illegal drugs" and that this was "often at the expense of human rights, due process rights, the rule of law and accountability".

What does the Duterte administration say?
It is not the first time his government has been criticised for its brutality in cracking down on drugs and crime.

But so far the Duterte administration has always rejected allegations of wrongdoing and when the UN voted to launch its investigation, Manila branded the probe as a "travesty". According to the UN report, there has been only one conviction for murder despite thousands having been killed.

Rodrigo Duterte won the presidency on a platform of crushing crime and fixing the country's drugs crisis. Despite the many killings he remains very popular in the country.
But for the UN report's co-author Ravina Shamdasani, positive opinion polls should not be used to justify bloody campaigns like the drug war.

"The government has a duty under its constitution and under human rights law to protect people from human rights violations," Ms Shamdasani said. "Just because it is popular does not make it right."