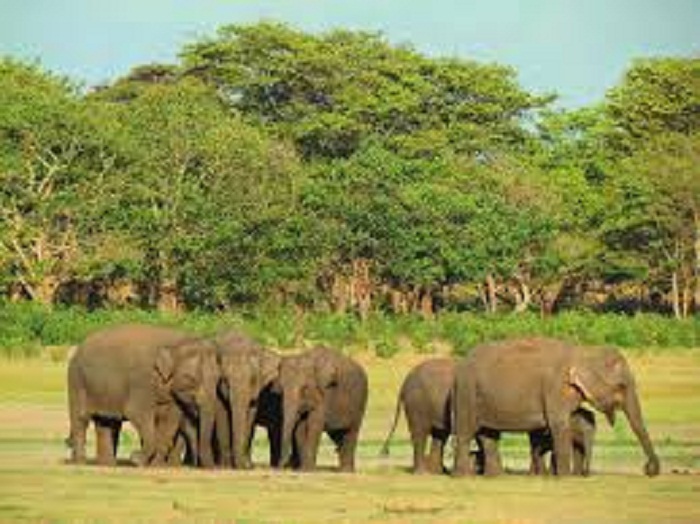 Farmers of the bordering area in Roumari upazila of Kurigram have become worried due to the damage of their crops by a herd of wild elephants from India over the last one week.

A herd of wild elephants enter the bordering area every night and eat up paddy and other crops of the villagers, causing huge losses to farmers.

Though the farmers are trying to drive the elephants away by torching fire and playing drums but to no avail.

Locals said a herd of wild elephants numbering 25-30 have been entering the bordering area of the upazila through Garo hill for the last one week and destroying the standing crops in Algachar, Kheuarchar, Bakbanda, Jhaubari, Chuliarchar and Boraibari areas.

The affected famers said the elephants enter the area through the pillar no 1057 and 1072 every night and then took position at the no man’s land after damaging their crops.

It also attacked the houses of the farmers, they said.

Abul Hossain, a resident of Baraibari char, said, “The herd of elephants have eaten up his ripen paddy from one bigha of land and destroyed other crops. Every year he has to incur massive losses due to the elephants.”

Mohammad Ruhul Amin, former MP of Roumari upazila, said, “We have informed the matter to the authorities concerned of the two countries to prevent the entrance of the elephants.”

Shahriar Hossain, an Upazila Agriculture officer, said they are working to assess the losses in the area. “We have asked the farmers to harvest their paddy as soon as possible,” he said.

According to a study, 'Status of Asian Elephants in Bangladesh' jointly conducted by International Union for Conservation of Nature (IUCN) Bangladesh and Bangladesh Forest Department,  there are a total of 39 natural crossing points that elephants use regularly to migrate between Bangladesh and neighbouring countries.

Among them, about 33 crossing points are along the Indian border and remaining six are on the Myanmar frontier area. Most of the crossing points fall in Bangladesh's northern part.

About the vagrant trans-boundary elephant-crossing points, the study revealed that seven vagrant points were identified along the international boundary of northeastern districts of Bangladesh. Stray elephants from India inadvertently entered Bangladesh by breaking the barbed-wire fences or crossing rivers.

Elephants every year cross the border and enter the localities of Bangladesh seeking food as they have lost their natural habitats. They frequently lock into clashes with humans and damage crop field.