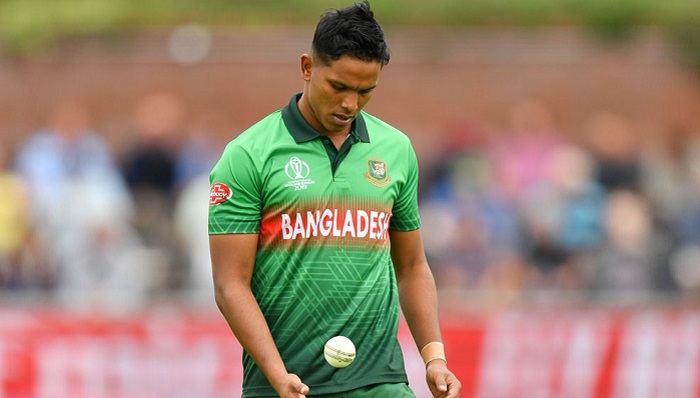 It’s been one year since Bangladesh’s ICC World Cup 2019 campaign but for all-rounder Mohammad Saifuddin, it still haunts him after being labeled as someone not ready to face tough opposition.

Despite being injured, Saifuddin was the second-highest wicket-taker for Bangladesh in the showpiece event but that hardly mattered as his commitment was questioned by a certain sector after he opted to take rest against Australia due to the pain. The boy from Feni spoke at length with daily sun regarding the whole affair along with his plan for the future.

daily sun: What was your reaction when you were labeled as someone not ready to play against big teams after you decided to skip the game against Australia?

Mohammad Saifuddin: It was heartbreaking for me after learning about reports that I skipped the match against Australia as I am afraid to play against strong teams. I was feeling helpless in the room after the news broke out in the media. Miraz (Mehedi Hasan) came to my room and gave me mental support at that point of time as I was mentally shattered. After practice or game when everyone was returning back to the room, I opted to go to the swimming pool as I used to feel good by swimming or jacuzzi. I was going through some or other rehabilitation programme throughout the World Cup and despite all this when someone questions your commitments it really hurts.

daily sun: How did you sustain the injury?

Mohammad Saifuddin: Before ICC World Cup 2019, we went to play a tri-nation series in Ireland where we won the title for the first time on foreign soil under the leadership Mashrafe (Mortaza) Bhai and Steve Rhodes.  So in that series, Rubel (Hossain) Bhai's room was next to mine. I went to his room for some reason and I saw he was sleeping in the floor. I asked him why he was doing that. He said that the tournament is a long one so if he had a back pain then there will be a problem. Then it occurred to me that as Ruble Bhai is so serious, so I should also sleep on floor. And we all know that the weather in Ireland was a little cold. So I got up the next morning and felt something wrong with me. I had this back pain for a long time but it was not severe as it came and went. Then I told about it to our then physio (Thian Chandramohan) and he told me that it was nothing serious, maybe it's because of the change in weather and it will be fine in a few days (though that was not the case).

daily sun: How would you rate your performance in the Tri-nation series in Ireland?

Mohammad Saifuddin: I played the first ODI against West Indies and then I played in the second ODI against Ireland and after playing two ODIs I started to feel bad when I went for practice before the third ODI. I told the coach that I am suffering from pain and what should I do. I didn't play in the third ODI. After that the fourth match was cancelled due to rain and then Shakib (Al Hasan) Bhai did not play in the final due to groin injury and I was thinking what people may think if I say that I am not ready to play in the final and opted to play the match and bowl five overs. Then we won the match and became champion. On our way to the hotel, I was waiting in the lobby for the physio then I told the physio and Steve Rhodes that I have something to tell them. Then I told them that I am in pain and what can I do now. Rhodes told me I am one of his key players and he wants me in the World Cup squad.

daily sun: Did you face issues while playing against India in the practice game?

Mohammad Saifuddin: I played a practice match against India before ICC World Cup 2019. I bowled six overs in that match and after then I started to feel that my back-pain is increasing. So I got out of the field. After sometime, Mashrafe Bhai told me to bowl. I told him that I am feeling some pain, he didn't tell me anything. It was reported in the media that I threw my cap out of frustration but nothing of that sort happened because I am not such a character. Honestly speaking, I don’t fake.

daily sun: What happened during ICC World Cup 2019? Is it true that you had to take a pain killer injection before the start of the tournament?

Mohammad Saifuddin: When we went to London to play the first match of the World Cup, I told the physiotherapist that I can’t bear this pain anymore. They should either give me a solution or give me an injection. Then team management decided to give me an injection that was worth nearly two lakh taka. I started to feel better after taking the injection. So, I played the first match against South Africa and after bowling for seven-eight overs, I started to feel the pain again. But I played on the back of sheer willpower in the next couple of games but after playing in the game against Afghanistan, we were on a bus journey for about 4-5 hours when I arrived, I couldn't hold myself anymore, I couldn't stand up straight. Then I told that it's hurting a lot and I can no longer take it. I had played many matches on the back of my willpower but I think if I play in this match, it will be more bad than good. Later I was granted rest as per the physio’s recommendation for the match against Australia and after we lost the match against Australia, there was a big fuss about me in the media.

daily sun: Do you feel that people raised fingers at you claiming that you are afraid to play against big teams because you did not bowl against India and decided to take rest against Australia?

Mohammad Saifuddin: Probably people have added two plus two considering I decided not to bowl when Dhoni was bating on his way to hundred (in the practice game) and also decided not to play against Australia (for not being able to bear the pain) without knowing the actual facts. But I don’t really want to blame anyone because it was all destiny.

daily sun: How was your rehabilitation programme?

Mohammad Saifuddin: After I returned from World Cup, I was put in rest ahead of the Sri Lanka tour and later returned with the Tri-nation Series at home after a two and half months rehabilitation. When my MRI report came, nothing was found but later in the radio scan, my stress fracture was found. Initially it was advised that I needed surgery but later Julian Calefato came up with an alternative plan.

daily sun: Can you tell us about your present condition?

Mohammad Saifuddin: I have always had the confidence to do well considering I did not fare badly in the World Cup and in the meantime I had worked on my bowling with Champaka Ramanayeke when I was away from the national set-up. The most important thing is that I don’t have that pain anymore like I used to have earlier after getting up in the morning, I had to spend around ten minutes just to get hold of myself but that is not the case now. In the last home series against Zimbabwe I did not have any pain. That is probably due to the fact that I am more concerned with my fitness than before. I am sure if there is no fitness issue, I will be able to deliver both with bat and ball because my goal to establish myself as an all-rounder.