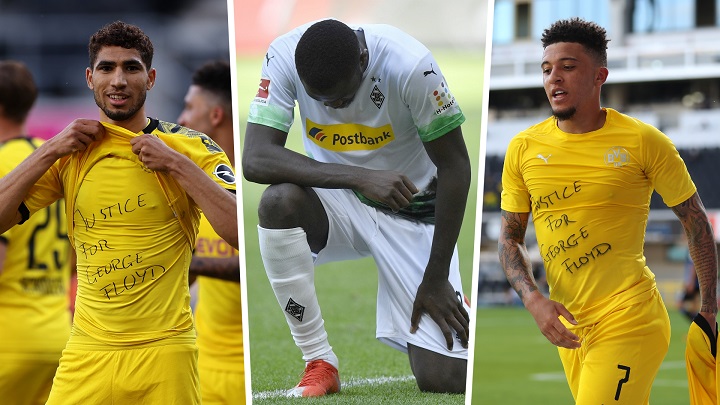 Bundesliga players including Jadon Sancho who staged protests during matches following the death of American man George Floyd will not be punished, the German Football Federation said on Wednesday.

In a statement, the DFB said "no action" would be taken against Borussia Dortmund players Sancho and Achraf Hakini, Schalke's US midfielder Weston McKennie and Borussia Moenchengladbach's French forward Marcus Thuram for "their symbols of solidarity".

"This line will also be taken should further players make demonstrations on racism and the death of Floyd over the course of upcoming matchdays," the DFB added.

After scoring in Dortmund's win at Paderborn on Sunday England winger Sancho lifted his shirt to reveal the message "Justice for George Floyd".

Floyd's death after a policeman kneeled on his neck for several minutes has sparked eight days of protests in the US cities.

Hakimi and McKennie expressed similar calls for justice, while Frenchman Thuram, the son of World Cup winner Lilian Thuram, took a knee after scoring for Gladbach in memory of Floyd, echoing similar protests against police brutality started by NFL player Colin Kaepernick in 2016.

On Tuesday, FIFA chief Gianni Infantino said that players demanding justice for Floyd, should be applauded.

The DFB had launched their investigation into the players' tributes following guidelines from the sport's lawmakers, the International Football Association Board.