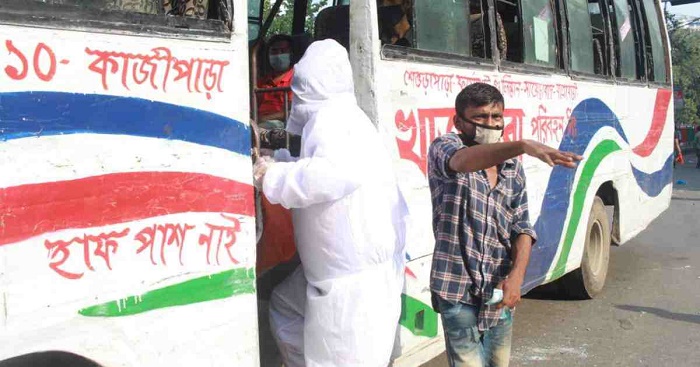 Far from going by the government decision to hike a 60 percent more fare than usual, the transport operators are charging passengers at their own sweet will, sometimes realising a double fare, thanks to the lax monitoring of the situation.

Moreover, the new chart bearing increased fare was not seen hanging while many passengers complained that they were charged double.

Under the circumstances, many passengers often get involved in altercations with transport workers over bus fare.

Experts said people lost source of income as they were out of work for the last two months due to the closer to curb the spread of coronavirus. But now they will have to pay more to use public transport.

On Tuesday, the second day of public transport, the number of buses on the road increased more than the previous day. The number of passengers was also high. People are traveling to their destinations by public transport amid the risk of corona virus.

Visiting various bus stoppages in the capital including Mirpur 12, Banani, Mohakhali, Gulshan 1 and Notun Bazar it was seen that most public transport are running in accordance with the health rules prescribed by the government. However, in some places, there are violations.

The altercations while charging fare by transport staff from passengers often lead to scuffle between them.

Such scene has become common on the different city bus service routes since June 1 after the officially announced of fare hike took effect.

Although the general people are satisfied with the health rules being followed during trip, many are yet to come to terms with the increased fare. Besides, they have also expressed doubts about how long the health rules will be followed.

While boarding a bus from Mohakhali to Gulshan 1, the bus supervisor sprayed disinfectant in the hand. There was no sanitizer in the bus and physical distancing of three feet was not maintained in case of passenger movement.

To prevent the spread of coronavirus, passengers have been instructed to take half the number of seats in the bus. Due to this, the government has increased the bus fare by 60 percent.

Driver and helpers said they had not received any list of additional fare from the government. So, they are taking extra rent calculating it on their own.

Shohrab Chowdhury, a passenger of Suprabhat Paribahan, said, “I used to go to the gate of Bashundhara residential area from Paltan junction for Tk30. If the rent increases by 60 percent, it should be Tk48, but they took Tk55.”

The distance from Mirpur 1 to Science Lab via Jatrabari is 17.6 km. According to the list of Bangladesh Road Transport Authority (BRTA), the fare was Tk30. After increasing it by 60 percent, it should be Tk48, but Trans Silva Transport is charging Tk60 which means a double price.

Calling on the passengers to be aware, the minister said, “We can prevent this infection by maintaining awareness and proper social distancing. Our own negligence and laxity can worsen the disaster.”

Mehedi Hasan, a private employee, said, “I have to use public transport to go to office. They are charging almost a double fare. The government is only thinking of the bus owners, not the people.”

The Consumers Association of Bangladesh (CAB) has demanded that the government review and cancel its decision to increase bus and minibus fare by 60 percent conditionally during the ongoing corona epidemic.

A press release issued by the organisation on Tuesday said the conditions under which the government has increased bus-minibus fare are not realistic in most cases.

The government has hiked fare by 60 percent, but in many cases, passengers are being charged double, the statement said, adding that the hike in bus and minibus fare has made the lives of the unemployed lower and middle class more miserable.

“CAB thinks that the increase in bus fare will have an impact on other sectors as well, causing inflation, hurting the country’s economy and increasing the cost of living,” it said.