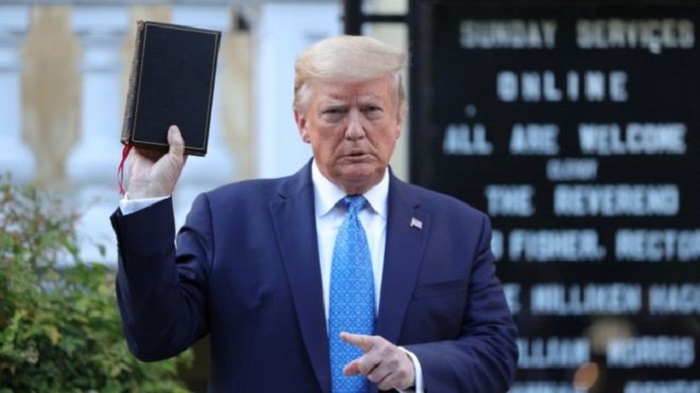 Last night he held a Bible in front of St John's Episcopal Church, just across the road from the White House. Today, he'll visit the Shrine to St John Paul II, also in Washington DC.

But US President Donald Trump's signalling of religious affiliation has not been welcomed by a range of clerics as the nation struggles to manage the twin challenges of a pandemic and widespread political protest.

The Episcopal Bishop of Washington, the Right Reverend Mariann Budde, said: "The president just used a Bible, the most sacred text of the Judeo-Christian tradition, and one of the churches of my diocese, without permission, as a backdrop for a message antithetical to the teachings of Jesus."

James Martin, a Jesuit priest and consultant to the Vatican's communications department, tweeted: "Let me be clear. This is revolting. The Bible is not a prop. A church is not a photo op. Religion is not a political tool. God is not your plaything."

Rabbi Jack Moline, President of the Interfaith Alliance, said: "Seeing President Trump standing in front of St John's Episcopal Church while holding a Bible in response to calls for racial justice - right after using military force to clear peaceful protesters - is one of the most flagrant misuses of religion that I have ever seen."

President Trump does not belong to a particular congregation, only occasionally attends a service and has said many times that he does not like to ask God for forgiveness.