Devastation of Cyclone Amphan: Experiences from the Field 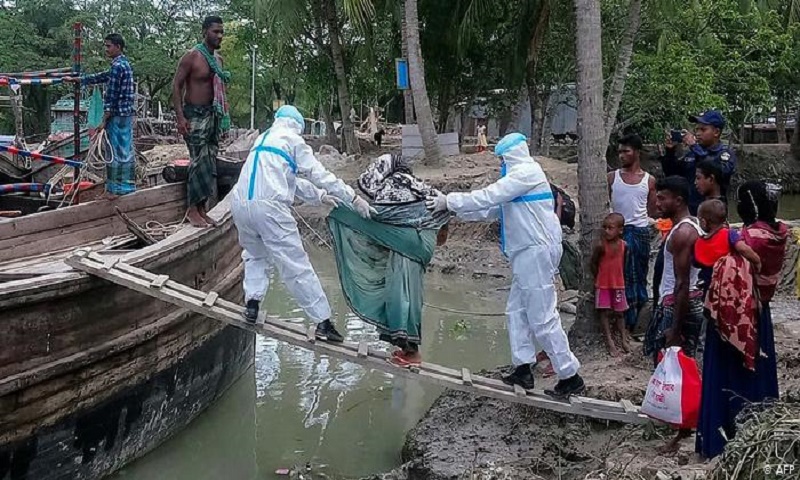 Cyclone Amphan has reportedly killed at least 72 people in India and 16 in Bangladesh and many more were injured. Amphan was the most powerful cyclone to strike eastern India and Bangladesh in about last 20 years after Cyclone Aila in 2009. It has destroyed crops and damaged embankments in the coastal districts, mostly in Khulna, Satkhira and Bagerhat. Most of the deaths were either from electrocution, collapse of walls, drowning or crushed by trees uprooted by speedy winds. Reportsfrom localities confirmed damage of thousands of houses, croplands, shrimp enclosures,embankments and uprooting of trees in different sub-districts across the coast. The United Nations office in Bangladesh estimates 10 million people were affected;some 500,000 people might have lost their homes.An extensive damage has been reported for the mango crop in Satkhira and Rajshahi. Mobile phone networks are not working in some of the worst hit areas due to the disruption.

Uprooted trees suspended road communications, left entire villages without access to fresh water and electricity. Most of the low-lying areas in the coastal districts went under water due to torrential downpourand beaches in embankments.Mass evacuations organised by authorities before the landfall of the cyclone undoubtedly saved countless lives, but the full extent of the casualties and damage to property would only be known once communications are restored, officials said.

The Sundarbans, the world’s largest mangrove forest, has once again saved the life of the coastal people as before by shouldering huge damage. It is reported flora and fauna of the famous forest have been damagedpartly both in West Bengal and Bangladesh.

Different sources confirmed that, prior to the cyclone, around 2.4 million people were evacuated from their homes and more than half a million livestock were brought to shelters in Bangladesh. Led by local administration, the Cyclone Preparedness Programme (CPP), youth groups, staff members of non-government agencies and low-enforcement agencies took part in the evacuation process. Because of the coronavirus, authorities used extra shelter space to reduce crowding, while making face masks compulsory, providing extra soap and sanitizer and setting aside isolation rooms.Bangladesh managed an additional 12,000 cyclone shelters which has helped to maintain social distancing in the shelters in addition to the regular 5,000 shelters in the coast. In spite of all arrangements, evacuation efforts had been hampered by the need to follow strict physical distancing precautions to prevent the spread of coronavirus. Many people had also refused to leave their homes and move to shelters for fear of contracting the virus. Actually it was an impossible choice of braving the cyclone by staying at homes, or risking coronavirus infection in shelters. Therefore, the fear of coronavirus has made the response complicated.

Overall, Bangladesh has shown a great readiness to tackle a natural disaster, particularly cyclone. As a result, the damage was not as much as it was apprehended. However, beyond these facts and statistics, the “story” on the ground was not an easy one. Despite all preparations, there were still many gaps, and many issues cropped up during the response process.

During cyclonic storms, taking shelter at safe, designated buildings is the ultimate measure of preparedness. In the 13 coastal districts of the country, around 5,000 shelters have been constructed over the yearsto minimise loss of life and property caused by natural disasters. Unfortunately, a significant number of the shelters are not usable due to the lack of proper maintenance. In every shelter along the coast, around 2,000 people were accommodated during disasters even though their capacity is 200 each. This makes it clear that the number of shelters is not sufficient.A large number of cyclone shelters did not have drinking water, sanitation and safe spaces for vulnerable groups (children, elderly, women, adolescents). Therefore, an urgent need was found to repair or install drinking water facilities and latrines at the cyclone shelters.

A common complaint is raised against the coastal people that they refuse to leave their belongings and cattle’s behind when the time comes. One of the reasons is the increased robbery, so male family members often choose to stay behind in their homes. This leads to more casualties. The best way to minimise this would be to increase the number and size of “killas” (elevated mud-built spaces for keeping animals safe) nearby cyclone shelters. Also upgrading security measures is essential. Only few areas have shown the preparedness for separate measures for COVID suspected people. While inclusion for women, aged and persons with disabilities remained an issue for the access to the shelter.

The accuracy of the early warning system has also become an issue during Fani, Bulbul and Amphan. During Fani, signal number 10 was shown although later the storm did not hit the danger level. The same was the case during Bulbul. From the beginning, Amphan was directed to West Bengal while signal number 10 was shown to Cox’s Bazar. This kind of inaccuracy demotivates people to go to the shelter.The British developed the traditional signalling system (comprised of 10 signals) and we are still using it. What we need is a people-oriented signalling system, which is available today. The reason it is not still used is because enough initiatives were not taken to familiarise the people with the new system. If we jump to signal 10 directly from 4, then what is the point of having all the other numbers in between?The meaning of signal number 7 and 10 isthe same.

The quick assessment from Water Resource Ministry confirmed that Amphan has damaged 84 points in embankments spanning around seven kilometres and a half across the 13 districts. Initiatives have been taken to repair and rebuild the embankments since Aila hit in 2009 while governance remained a big question for the proper utilisation of the resource during development of embankments. The local governmenthasidentified the weak points in embankments since long back but did not make efforts to address the gaps. Therefore, the damage from Amphan can be considered a man-made disaster.

Materials for early warning, awareness and search and rescues are insignificant across the coast. Availability of these materials among the Disaster Management Committees (DMCs) and volunteer groups in pre and during disaster can minimise loss of lives and livelihood. CPP volunteers and DMCs in the districts, upazilas and unions become active once disaster comes, but otherwise these committees do not even hold meetings on a regular basis, and most are no longer properly certified. As a result, there is a lack of coordination observed during response.

As we wrote, Bangladesh has shown readiness for cyclone response, thus the total damage from natural disastershas significantly decreased over the years. In last 25 years, a total of 135 million people were affected by different disasters, of whom 16,513 lost their lives. In 2007, cyclone Sidr hit the coastal belt affecting all the 32 districts and around 4,000 people died. The number of deaths dropped to 300 by the time Aila rolled around in 2009.All this happened because of the initiatives undertaken by the state and non-government agencies including positive role of media and community-based organisations. We need to continue to address the gaps in order to improve our disaster management record in the future.

The writers are development practitioners, working with World Vision Bangladesh.