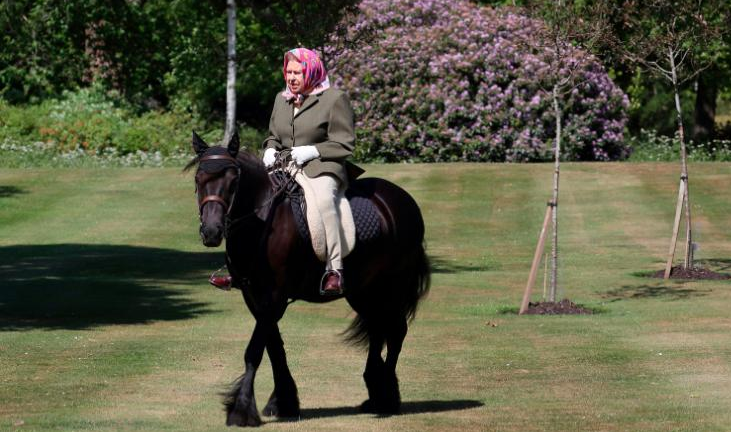 Britain's Queen Elizabeth II has been pictured riding on horseback in Windsor, west of London, in her first public appearance since the coronavirus lockdown began in the UK.

The Queen could be seen riding around Home Park, next to Windsor Castle, over the weekend, wearing a green jacket and a colorful scarf.

The images, released Sunday, feature the monarch riding Balmoral Fern, a 14-year-old fell pony, according to a Buckingham Palace news release. The Queen was riding in Home Park, next to Windsor Castle.

The Queen has long been known for her love of equestrian pursuits, including horse racing, and has regularly been photographed on horseback over the decades.

The monarch turned 94 in April but the traditional royal gun salute to celebrate her birthday was canceled for the first time in 68 years. A royal source told CNN that she felt it would be inappropriate due to the pandemic.
Trooping the Colour, the military parade held annually in mid-June to mark the official celebration of the Queen's birthday, was also canceled.

Last month, on the 75th anniversary of VE Day, Elizabeth gave a rare televised speech from Windsor Castle in which she likened the British public's response to the pandemic to the efforts of British soldiers during World War II.
That followed another speech, in April, in which she called for unity in the face of the pandemic.