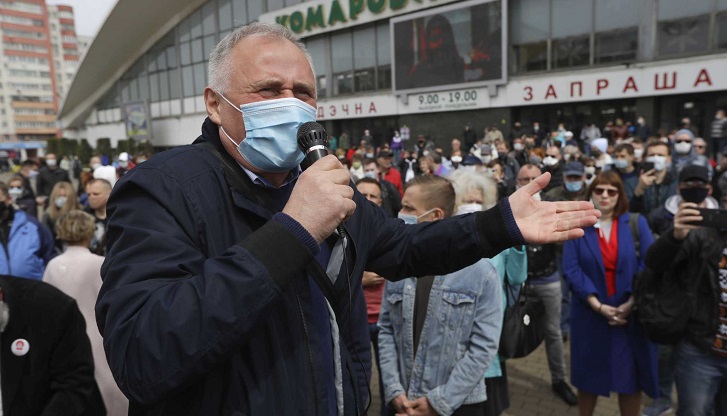 Dozens of opposition activists were being held in Belarus Monday, including a former presidential candidate, following a political rally ahead of presidential elections this summer.

Tensions in the authoritarian ex-Soviet country have ratcheted up since authorities announced presidential elections would be held on August 9.

Alexander Lukashenko, who has ruled the country with an iron fist since 1994, has confirmed he will run again.

Belarusian rights groups denounced what they described as the political persecution of popular video blogger Sergei Tikhanovsky, who was arrested and accused of using violence against a police officer at a rally Friday.

Rights group Viasna said some 50 people were detained at the demonstration in Grodno in the west of the country and in other cities.

Footage from the rally, where Tikhanovsky's wife Svetlana was gathering signatures for her presidential campaign, showed a police officer falling. The authorities launched a probe into police violence.

More people who gathered to support Svetlana Tikhanovskaya's candidacy were detained on Sunday.

During a campaign event on Friday Lukashenko dismissed the possibility of Belarus being led by a female president.

"We'll have a man for president. I'm certain of it," he said in a speech to factory workers.

"Our constitution is not for a woman (president). And our society is not ready to vote for a woman."

Police in Minsk also detained former presidential candidate Mikola Statkevich, whose own presidential bid was thrown out last month due to a prior conviction.

Statkevich challenged strongman Alexander Lukashenko in the 2010 elections but was sentenced to six years in prison. He was released in 2015.