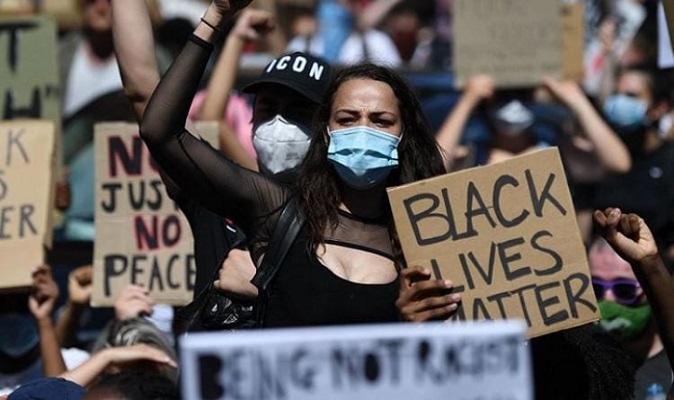 Hundreds of Londoners defied coronavirus restrictions and rallied outside the US embassy on Sunday in solidarity with protests raging across the United States over the death of an unarmed black man during an arrest.

The death of George Floyd in Minnesota has sparked five consecutive nights of often violent protests that resulted in National Guard troops patrolling majority US cities on Sunday.

The London protesters chanted "no justice, no peace" and held up "Black Lives Matter" signs outside the US embassy compound on the southern bank of the Thames River.

A few hundred had earlier gathered in Trafalgar Square in the heart of London for a vigil that saw everyone kneel for nine minutes -- the amount of time the policeman kneeled on Floyd's neck.

But he refrained from commenting on US President Donald Trump's explosive tweets and controversial public statements about the protests.

"I've long kept to the self-imposed guidance not to comment on what President Trump says," Raab told the BBC.

Authorities will officially allow groups of up to six to gather in England -- and up to eight in Scotland -- starting on Monday as more than two months of restrictions begin to ease.