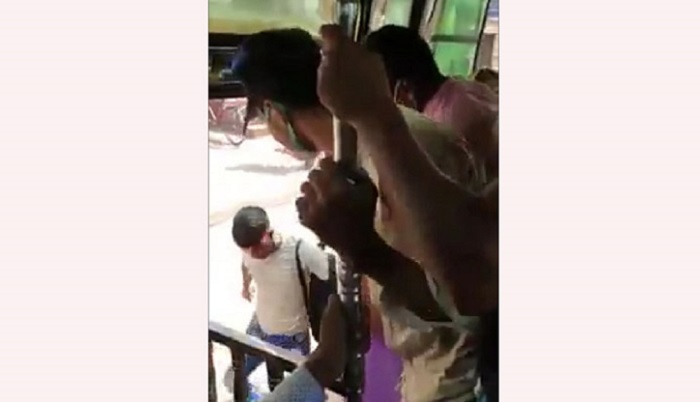 Public transport restarted operations in the capital on Sunday nearly two months after their closure in the wake of the deadly coronavirus pandemic in the country.

The government has increased the bus fare by 60 percent so that hygiene rules and physical distancing can be maintained properly.

Although there were instructions to follow health guidelines in public transport, but it was not followed. The buses did not have any safety equipment like hand sanitizers or disinfectants.

Meanwhile, some relief has returned among passengers after the resumption of traffic after a long time.

During a visit to Fakirapool and Motijheel on Sunday, it was found that most of the staff buses of various government organizations did not have physical distance.

Hand sanitizers and disinfectants were supposed to be placed at the entrance of the vehicle but it was not seen. The caution was seen only at the personal level.

Some public buses have been found to adhere to physical distances. However, most buses were not maintaining it. A number of buses were seen jam-packed on various routes, including Tongi-Syedabad one.

Workers are waiting on the road for transport in Khilgaon and Basabo. Small human-haulers used to run from there on Rajarbagh, Fakirapool, Dainik Bangla and Gulistan routes in the city. There is no space in these cars.

Asma Shabnam, a private employee, said, “The office opened today (Sunday). There are no empty seats in the buses. The rules of hygiene are not being followed.”

Shamsuzzaman, another private employee of Motojheel, said, “No one is following the hygiene rules on the bus. Physical distance is not being maintained. Disinfectant sprays are also not being used.”

Train and launch services also resumed after a two-month public holiday due to the corona situation.

Although hygiene is observed at various railway stations, physical distance is neglected in passenger launch.

From Sunday morning, passengers are getting on the train at different stations of the country, including Kamalapur railway station, following the hygiene rules.

Passengers are being allowed to board the train after measuring their body temperature and cleaning their hands and feet with disinfectant.

Banalata Express train left Rajshahi station for Dhaka at 7:00am on Sunday with half the number of passengers. Subarna Express also left Chittagong for Dhaka following health rules.

On Saturday, Railway Minister Nurul Islam Sujan said: “We will sell 50% of the tickets to avoid crowds. But all the tickets will be sold online. Tickets will not be sold at stations.”

He also said: “Passengers can get on a train only from Kamalapur Railway Station to depart from Dhaka, as no train will stop at Airport, Gazipur, and Narsingdi railway stations to avoid crowding.”

After 66 consecutive days of closure, launches have been introduced in a limited way from Sunday with risk. Passenger boats have started plying on 42 routes across the country including Dhaka river port.

On the first day, the launches were overflowing with passengers. Any kind of health rules of social distancing was not maintained.

While visited Sadarghat terminal of Dhaka river port around 11:00am, it was found that the passengers of the launch were sitting in the platform of the terminal without maintaining the social distance. Many were not wearing masks at the time.

Shujan, a Bhola-bound launch passenger, said, “Yesterday I came to know that the launch will start operating today (Sunday). So I came to Sadarghat terminal to go to Bhola. I am sitting in the terminal and waiting for the launch.”

MV Sonartori launch left Chandpur launch terminal for Sadarghat in the capital at 7:00am on Sunday. Although passengers were instructed to clean their hands with disinfectant and adhere to social distance before boarding the launch, many did not comply.

The launch authorities said that due to the extra pressure of the passengers they have to struggle to ensure social distance.

Kazi Wakil Nawaz, director (port) of the BIWTA, said measures have been taken by BIWTA and launch owners to protect the health of launch passengers.

To protect the health of the passengers, six disinfectant tunnels and hand sanitizers have been set up at the entrance of Sadarghat terminal.

“Disinfectants are being sprayed. Launches were carrying a limited number of passengers,” he added.