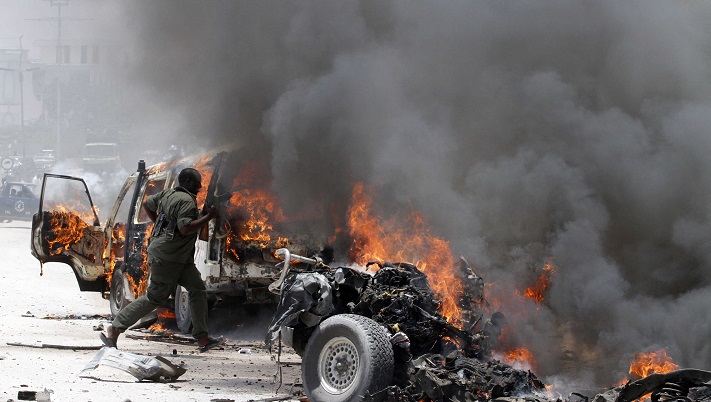 At least 10 people died and 12 were wounded when an explosive device ripped through a minibus outside the Somali capital Mogadishu on Sunday, the government said.

The deadly explosion occurred near Lafole village along the Afgoye-Mogadishu where the passenger bus was travelling early in the day.

"At least 10 civilians were killed in an explosion at Lafole area this morning, those who died were all civilians," the information ministry said in a statement, adding that the victims were on their way to a funeral.

Witnesses said the minibus was completely destroyed, and described an horrific scene with everyone on board either dead or wounded and many bodies ripped apart or burned beyond recognition.

"This was a horrible incident this morning, the explosive device went off as the bus was passing by the area and destroyed it completely," said Daud Doyow, a witness.

"Bodies of civilians were strewn in pieces and most of the people died," he added.

"There were more than 20 people on board and 10 of them were confirmed dead while the rest are seriously wounded and taken to hospital, this is a horrible scene here," said another witness, Abdirisak Adan.

No group immediately claimed responsibility for the bombing, but Somalia's al Qaeda-aligned Shabaab group carries out regular attacks in and around the capital, often killing civilians.