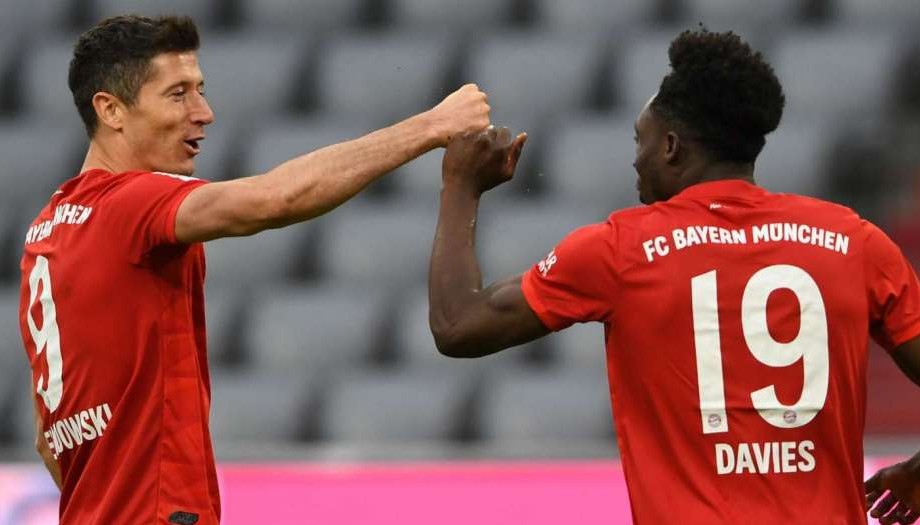 Robert Lewandowski scored twice against Fortuna Dusseldorf to equal his most prolific season as Bayern Munich moved 10 points clear at the top.

Bayern were 3-0 up by half-time, Benjamin Pavard and Lewandowski scoring after Mathias Jorgensen's own goal opened the scoring.

Poland forward Lewandowski's 43rd goal in all competitions this campaign made it 4-0 in a crushing win.

It will require an exceptional set of circumstances to deny Bayern an eighth successive Bundesliga title at the end of June.

Second-placed Borussia Dortmund will cut Bayern's lead to seven points with five games remaining if they win at bottom club Paderborn on Sunday (17:00 BST) but Bayern look as ruthless as ever.

This was their fourth straight victory since the Bundesliga season restarted earlier this month, and they have scored 13 goals and conceded just two since the resumption of the campaign.

There was a touch of fortune about their first goal, Pavard's attempt was going wide when ex-Huddersfield defender Jorgensen diverted it over the line while attempting to clear.

Pavard doubled the lead with a header from a corner, while Lewandowski started the move which ended with him making it 3-0.

Fortuna Dusseldorf were unbeaten in their previous six games yet Uwe Rosler's side were blown away, Lewandowski tapping home the fourth before the goal of the game.

Davies showed what an exciting talent he is as the 19-year-old won possession on the edge of Fortuna Dusseldorf's penalty area before going past a couple of players to score.