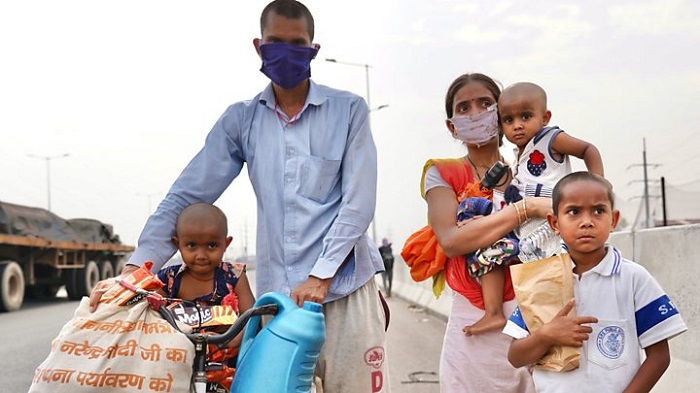 India has announced plans to further ease a strict national lockdown even as the country reported a record daily rise in new coronavirus cases.

From 8 June, restaurants, hotels, shopping centres and places of worship will be allowed to re-open in many areas in the first stage of a three-phase plan.

But areas with high numbers of Covid-19 cases will remain under tight lockdown.

The plan comes after India registered a new record single-day rise in confirmed infections, with nearly 8,000 cases reported on Saturday.

In total India has recorded some 174,500 cases and nearly 5,000 deaths. The nation of 1.3 billion has been hit less hard by the coronavirus than many other countries.

It went into a strict lockdown more than two months ago when the confirmed caseload was in the hundreds. Official data suggests the decision prevented the loss of between 37,000 and 78,000 lives.

However the cost to the economy has been high and pictures of millions of informal workers leaving cities for their rural villages after losing their jobs - some of them on foot - shocked the country.

Health officials say that they are able to further lift the lockdown in many places because most cases have been restricted to urban areas in a handful of states.

As part of the three-phase plan:

These measures will not apply to designated "containment zones" where the virus is believed to be transmitting at a higher rate. Such zones are at the district or neighbourhood level.

The city of Mumbai, India's financial capital. in Maharashtra state, has one of the highest numbers of containment zones, reports suggest. Hospitals there are struggling to cope with an influx of virus patients.

The reported infection rate - the number of infections for every 100 tests - in Maharashtra is three times the national average.