Corona fatality much lower than other diseases 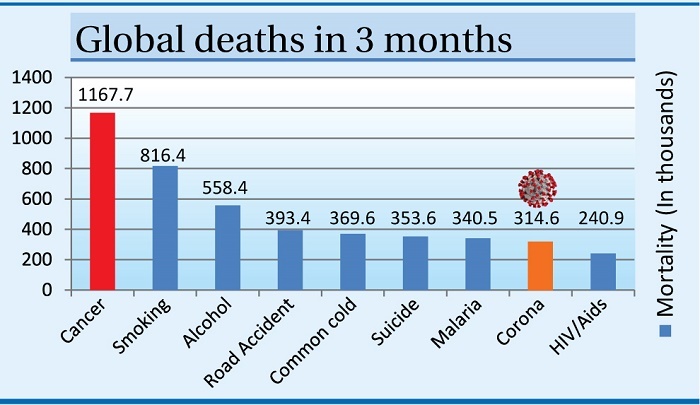 Social panic has marked a sharp rise in the country due to the ongoing wave of coronavirus although the death rate is much lower than other diseases.

Talking to the Daily Sun, physicians and public health experts urge people not to be panicked due to the virus.

They said that the coronavirus disease can be prevented through developing ‘regular hygiene habits’ as the world is now in search of vaccination.

They suggest that people should remain aware about personal protection through good practices and family-based health care.

Chest disease specialist Prof Mohammad Azizur Rahman mentioned that personal hygiene is crucial for the developing countries like Bangladesh as most of the towns are densely populated.

“Death toll from coronavirus is ‘normal’ in comparison to Europe and America as the country approached to lift general holidays from Sunday. In brief, the people should focus on personal health to improve immune system,” Prof Aziz told the Daily Sun.

Prof Aziz also recommended that people should not take any kind of medicine or vaccine without approval of the authorities concerned.

The Covid-19, first reported in China’s Wuhan, has been spread to over 200 countries across the globe.

Bangladesh has so far reported 610 deaths in the country while at least 44,608 patients have been detected with the bug.

Some 5.81 million people have been infected across the globe by the novel coronavirus and 364,994 have died, according to a tally by Johns Hopkins University on Saturday.

World scenario of death suggested that mortality from the newly emerged disease is lower than other diseases and unexpected accidents in last three months of the year.

Besides, suicide and road accident claimed 353.6 thousand and 393.4 thousand fatalities during this period respectively.

According to WHO, mosquito-borne diseases, such as malaria, dengue, and Zika, make them one of deadliest animals in the world, responsible for millions of deaths.

WHO estimates that vector-borne diseases (spread by animals) account for 700 thousands per year, of which at least 440 thousands by mosquitoes through transmitting malaria and dengue fever (around 1,205 per day).

Though the coronavirus has been described as ‘worst public health crisis for a generation’, the global health experts recommended improving mental health rather than fear about the pandemic.

Health experts are on the opinion of taking every possible precaution against coronavirus and advise people to avoid panic and irrational behaviour.

But corona panic has reached such a terrible level among the people of the world that the world became motionless.

According to health experts if anyone gets infected with the virus, this still is not a cause for panic.

Amid the fear, experts encourage people saying that even if anyone gets infected with the virus, he/she has a chance to recover from it.