India’s farmers told to scare locusts away by beating drums 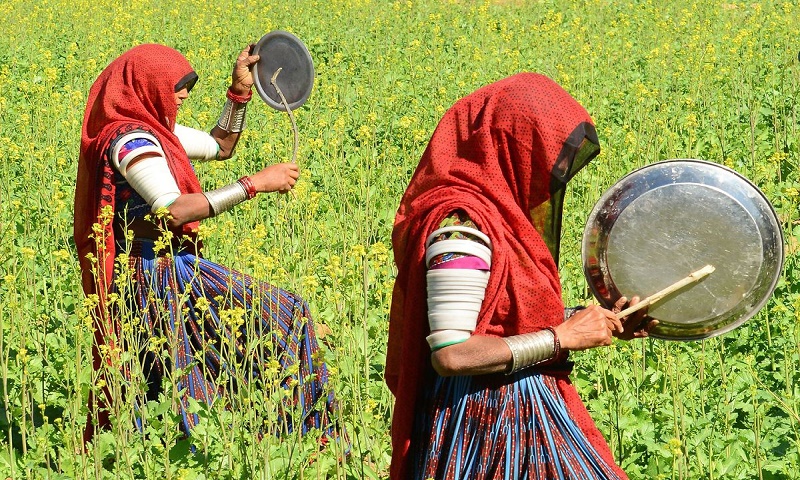 Farmers should create loud noise by beating drums, tin containers and utensils to protect their crops from millions of locusts, which have invaded India at a time when the country is battling the deadly coronavirus pandemic, Bloomberg reported.

The northern Indian state of Uttar Pradesh is on alert and various districts, including Gautam Buddha Nagar adjoining the nation’s capital New Delhi, have warned citizens to take preventive measures. Authorities have cleared locusts from about 50,468 hectares (124,709 acres) in several states, including Rajasthan, Madhya Pradesh, Gujarat, Punjab and Maharashtra, according to the federal agriculture ministry.

“In the event of a locust attack, farmers are advised to collectively beat loud drums, tin containers, utensils and use loudspeakers to prevent locusts from descending on farms and damaging crops,” Suhas LY, district magistrate of Gautam Buddha Nagar district, said on Twitter. The government is planning to spray pesticides during the night when locusts rest on trees, he said.

A massive locust attack on the country’s farms adds another challenge for Prime Minister Narendra Modi’s administration, which is trying to contain the spread of the coronavirus and limit its impact on the economy. It cannot risk food crops getting destroyed by the insects at a time when millions have been pushed into poverty after losing livelihood due to the world’s most stringent stay-at-home rules.

Some summer pulses, early-sown cotton, vegetables and fruit plantations run the risk of destruction from the winged invaders. The silver lining is that the harvesting of winter crops is over and sowing for the monsoon season is yet to begin. Still, there are concerns that locusts may hit mega cities, including New Delhi and Mumbai.

While officials in the affected states are working on measures to control locust swarms, the federal government is arranging drones to sprinkle pesticides on trees and inaccessible places to kill the insects. There are plans to deploy helicopters for aerial spraying, according to India’s farm ministry.

As many as 15 sprayers will start arriving from the UK in the next 15 days, followed by 45 more in one-and-a-half months, the farm ministry said Thursday, adding that affected states will be given financial aid if required.

Swarms of desert locusts occur irregularly in North Africa, the Middle East and South Asia, usually when drought is followed by heavy rain. Normally, with the arrival of the monsoon, locust swarms enter the desert areas of India via Pakistan for breeding in June-July, but this year pink adult swarms were reported as early as April 30 in Rajasthan and Punjab.

This is in part because of the uncontrolled swarms in Pakistan that breed continuously, the ministry said earlier. Swarms of pink immature adults fly high and travel long distances with strong winds coming from Pakistan. Most of them settle on trees during the night and mostly fly during the day.

The locust movement was helped by strong westerly winds from Cyclone Amphan that hit eastern India last week, according to the United Nations’ Food and Agriculture Organisation. Several successive waves of invasions can be expected until July in Rajasthan. These movements will cease as swarms begin to breed and become less mobile. Swarms are less likely to reach south India, Nepal and Bangladesh, it said on its website.

The control work is in full swing in coordination with states and the Border Security Force, the farm ministry said. There was no information regarding entry of any new locust swarm from India-Pakistan border areas as of Thursday. However, locusts entered from Sri Ganganagar district of Rajasthan on Wednesday, with control operations going on, it said. There are some active swarms of immature locusts in some parts of Rajasthan, Uttar Pradesh, Madhya Pradesh and Maharashtra.

In January, the biggest locust swarm to hit India’s Gujarat in over a quarter of a century resulted in more than 25,000 hectares of wheat, rapeseed, cumin and potatoes being attacked, with at least a third of the crops damaged in 75 percent of the affected areas, according to the state’s directorate of agriculture. A massive locust attack in 2019-20 saw about 403,488 hectares treated with pesticides, according to the federal farm ministry.