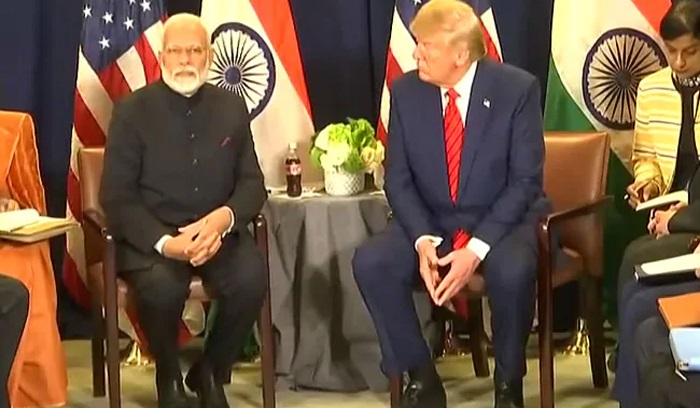 Hours after Donald Trump’s claim Indian authorities asserted that there had been no recent interaction between the two leaders.

On Thursday, President Trump made the claim reiterating his offer to mediate between India and China on what he called a "big conflict" going on between the two nations.

"I can tell you; I did speak to Prime Minister Modi. He is not in a good mood about what is going on with China," the US President said during an interaction in the White House.

According to the Indian officials, the last conversion between Narendra Modi and Donald Trump was held on April 4, 2020.

“There has been no recent contact between PM Modi and US President Trump. The last conversation between them was on 4 April, 2020, on the subject of Hydroxychloroquine,” said sources referring the Ministry of External Affairs officials.

“Yesterday, the Ministry of External Affairs had also made it clear that we're directly in touch with China through established mechanisms and diplomatic contacts,” sources said.

However, there was no immediate reaction has come out from the Indian premier Narendra Modi or his party.

The US President's mediation offers a day earlier was followed by a carefully crafted response from New Delhi on Thursday.

"India is engaged with Chinese side to peacefully resolve it," Anurag Srivastava, a spokesperson of the foreign ministry, told reporters when asked about Trump's offer.

"Our engagement on the diplomatic front continues both in Delhi as well as in Beijing," he added. India and China, he said, have engagements both at the military level as well as the diplomatic level. The two nations have signed several protocols on maintaining peace and tranquility at the border and there are many agreements.

President Trump on Wednesday tweeted that he was "ready, willing and able to mediate" between the two countries.

"We have informed both India and China that the United States is ready, willing and able to mediate or arbitrate their now raging border dispute. Thank you!" he had tweeted.

Asked about the tweet yesterday, Trump said if called for help, "I would do that (mediate). If they thought it would help" about "mediate or arbitrate, I would do that," he said.

Indian and Chinese soldiers have been locked in a face-off in Ladakh since early May. The tension came into sharp focus after reports of clashes between the soldiers of both sides in the Pangong Lake region on May 5 and May 6.

Trump's previous offers to mediate between India and Pakistan on Kashmir were firmly rejected by New Delhi, more than once.