Bangladesh threatens to ban some UK Brands, escalating battle to get factories paid 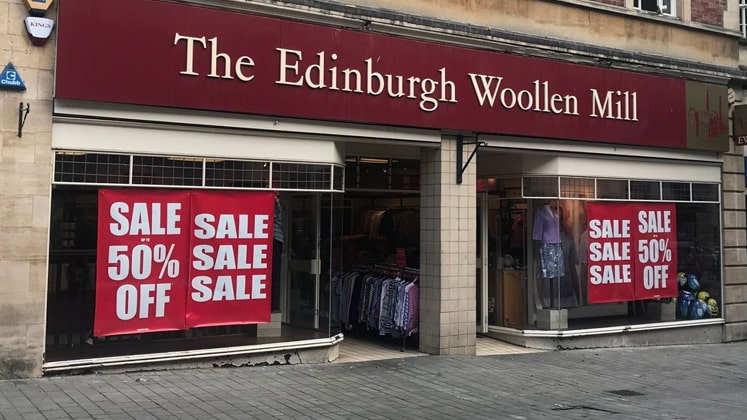 After a months-long battle to get factories paid for canceled orders, Bangladesh’s apparel export associations are threatening an embargo against a major Western clothing conglomerate that they say owes them millions for clothing made prior to the coronavirus pandemic.

Last Thursday, officials representing the Bangladesh Garment Manufacturers and Exporters Association (BGMEA) and the Bangladesh Knitwear Manufacturers and Exporters Association (BKMEA), sent a letter to Philip Day, the billionaire owner of Edinburgh Woollen Mill Group, which owns Peacocks, Jaeger, Bonmarché, Austin Reed, and numerous other UK brands, demanding that he settle all outstanding debts with suppliers or negotiate fair deals by Friday, May 29.

EWM Group allegedly owes between $2 to $3 million to Bangladeshi factories, according to the most recent BGMEA data. An embargo would block the company from placing future orders in the country, a region once under British rule and the world’s second-largest apparel manufacturer after China.

"It has unfortunately come to our attention that certain buyers are taking undue advantage of the Covid-19 situation and demanding unreasonable discounts, despite pre-Covid-19 contracts and continued business activity, which are not only impossible to grant by our members, but also in violation of local laws and international acceptable standards," the letter from BGMEA reads.

Although Day keeps a low profile (he was once described as a “quiet” billionaire who rarely gives interviews), his company has a large footprint, with 25,000 employees and more than 1,300 stores and an ever-expanding stable of retailers and brands. Prior to the pandemic, EWM Group was in good financial standing, ending 2019 debt free and with a significant cash balance.

On Saturday, the EWM Group responded to the associations’ letter in inews.co.uk, calling it “unproductive and uncollaborative,” and claimed to be working “hand-in-hand with all of its suppliers to find solutions.” Both Bangladeshi factory owners and labor rights activists dispute the company’s statement.

Who should bear the brunt of apparel’s financial pain?

The saga demonstrates increasing tensions in the apparel industry, which suffered record sales declines in March and April. At the center of the battle is the question over who should bear the financial brunt of the fashion industry’s lost season: The retailers that design and market the clothes and reap much of the profits or the factories that sew them together, often on razor-thin margins.

In March, retailers reflexively pushed the burden down the supply chain, canceling clothing orders (clothing companies generally place orders months in advance and pay factories back for the finished product only when it is delivered). The cancellations implied non-payment for completed work, which left factories in huge amounts of debt and, in many cases, with no way to meet payroll.

After a public outcry, many brands have agreed to pay for some or all of their goods. Although EWM Group has paid back over half of the initial $8.2 million in canceled orders it initially owed, according to some media reports, it acted irresponsibly in a number of other ways, sources say.

“The idea that they’ve been working with their suppliers diligently is absolutely nonsense,” says Scott Nova, the Executive Director of the Worker Rights Consortium, which is tracking brand cancellations. “And hopefully this will send a message to other buyers that taking grossly unfair advantage of your suppliers is something that can’t be done with impunity.”

In late April, according to suppliers and media reports, EWM circled back and demanded discounts of 70% on completed goods, which would force factories to operate at a massive loss. Bangladeshi manufacturers already offer impossibly low prices (the average export price per unit of clothing was a meager $2.79 in 2018) and taking steep discounts could be financially ruinous. “Some of these are smaller suppliers that could go under,” says Nova of the factories that are owed money by EWM Group.

Other suppliers dispute that EWM Group has worked with them in any way to find solutions to the unused stock. Mostafiz Uddin, owner of Denim Expert Ltd, is among them. Uddin says he’s owed more than $211,000 for 43,600 pairs of jeans his factory sewed for Peacocks, an Edinburgh Woollen Mills Group brand, and the company has stopped responding to his emails. “Can we not find solutions to solve this problem?” says Uddin in a text via WhatsApp. “They are not even replying to a factory who they say is their partner.”

Still others claim that EWM Group brands, including Peacocks, sent out general sourcing emails to new suppliers in May, in an attempt to switch factories without paying outstanding debts. “They are absolutely an unethical company. Pls don’t respond to them,” a well-known textile mogul texted to a Viber group chat of local factory owners (screenshots of the group chat were shared with me; suppliers wish to remain anonymous).

“Time to say BIG NO to all the buyers who are doing unethical purchasing practice,” a knitwear manufacturer responded.

Industry watchdogs say the search for new suppliers is what finally prompted the BGMEA to intervene and call for an embargo. “They are not only taking undue advantage of the situation but also violating the principles of ethical sourcing and procurement,” says Sifat I. Ishty, a development economist at Dhaka’s Brac University.

Garment-makers remain at the mercy of large global brands, but they’ve also quietly gained power in recent years. The cancellation crisis is pushing them to flex it. As Ashok Kumar, a lecturer in international political economy, explains in his new book, Monopsony Capitalism: Power and Production in the Twilight of the Sweatshop Age, intense market pressure has led manufacturers to consolidate and upgrade over the years, leaving a more sophisticated factory base increasingly able to call the shots. Bangladesh, for example, now claims to have the world’s largest-number of LEED-certified factories and, before the pandemic, was strategizing to move away from competing on low price alone.

There are reasons to believe that factories will remain in the driver's seat coming out of the coronavirus crisis, if they can survive. As the cost of labor climbs in China, mass-market and fast fashion brands have few alternatives to Bangladesh. This could help bring companies to the negotiation table. The outcry over cancellations and unethical sourcing could also lead to tighter regulations and new rules around purchasing orders that favor suppliers, says Ishty, the Brac University economist. “It will potentially result in more stringent terms and conditions being applied to all future business deals.”

What’s more, early research indicates that coronavirus may have deepened consumer loyalty to sustainable and ethical brands. A special coronavirus update to McKinsey’s and Business of Fashion’s 2020 The State of Fashion report notes that “the pandemic will bring values around sustainability into sharp focus, intensifying discussions and further polarising views around materialism, over-consumption and irresponsible business practices.” Those conscious consumers might ultimately decide the fate of brands that don’t treat their suppliers with respect.