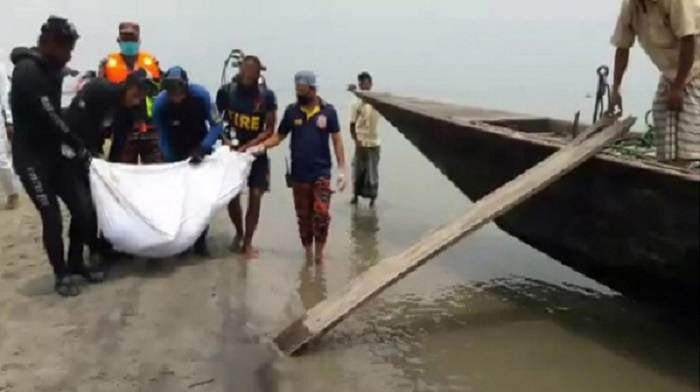 Divers on Thursday recovered bodies of four people who went missing after a shallow-engine driven country boat capsized in the river Dharla at Kasimbazar area of Ulipur upazila in Kurigram on Wednesday afternoon.

“The boat with 45 passengers aboard sank in the river amid stormy weather on its way from Namanir Char village near Satvita to Kasimbazar Ghat at 5 pm on Wednesday,” Officer-in-Charge (OC) of Ulipur police station Moazzem Hossain told BSS today.

Some 10 people of a bridal party, including a newlywed bride and her father, of nearby Durgapur union, were among the passengers of the boat on the way back home after taking part in a luncheon at the house of the bridegroom in Namanir Char village.

“Four of the passengers, including the father of the bride, went missing in the incident when the others managed to swim up to the riverbank,” the OC said.

Being informed, nine personnel, including three expert divers, from the Fire Service and Civil Defense Stations at Rangpur, Kurigram and Ulipur rushed to the spot and started the rescue drive from 8:30 am today.

“The divers with the help of the local people recovered all four bodies of the missing people one after another and abandoned the four hour rescue drive by 12:30 this noon,” the OC said.

Assistant deputy director of the Kurigram Fire Service and Civil Defense Station Manoranjan Sarkar led the rescue operation in presence of hundreds of local people on the riverbank, the OC added.