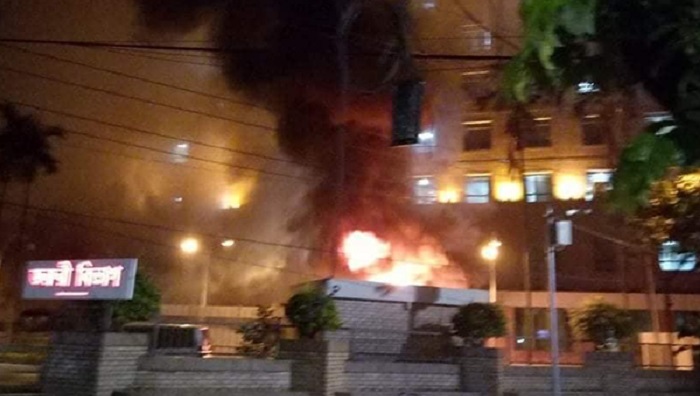 A total of five Covid-19 patients were reportedly burned to death in a fire incident at the United Hospital in Gulshan-2 area of the capital on Wednesday night.

According to the Fire Service and Civil Defence official, the fire was broke out around 9:55 pm at the makeshift isolation unit in front of the emergency department of the hospital opting treatment of coronavirus patients.

Being informed, three fire fighting unit of Baridhara fire station rushed to the spot and brought out the fire under control around 10:25 pm. After extinguishing the fire, five dead bodies—four male and one female—were recovered from the spot.

Later, a hospital statement was issued disclosing the incident and the identities of the victims. The nictims were—Riazul Alam, 45, Khodeza Begum, 70, Verun Anthony Paul, 74, Md, Monir Hossain, 75, and Md. Mahbub, 50.

All were infected with Covid-19 and were undergoing treatment at the isolation unit of the hospital.

The hospital statement also said that there were five coronavirus patients inside the isolation tent and all of them died in the fire.

Brigadier General Sazzad Hossain, Director General of the fire service and civil defence, said the firefighters had recovered five bodies from the area after the fire was brought under control.

The scene of the fire is adjacent to the main building of the hospital. There was no fire extinguishing system in it, Sazzad Hossain added.

However, he also supposed that the fire might be ignited due to an explosion of an air conditioner.

Meanwhile, eyewitnesses alleged that the hospital authorities did not take any step to rescue the patients from the unit despite they had time and scope to save them.

They also alleged that the fire service took about an hour to come to the spot, they also told media that the fire broke out around 9:20 pm.

However, details of the damages not yet estimated, it will be known after receiving their report, Kamrul added.

Meanwhile, Dr Shagufa Anwar, Chief of Communication of United Hospital said that the fire ignited from an electric short circuit outside of the main building of the hospital, adding no smoke entered inside and everybody was safe there.

She also said that the fire was brought under control within 10 to 12 minutes and all patients were taken back to safe place. Everything was under control, she assured earlier.