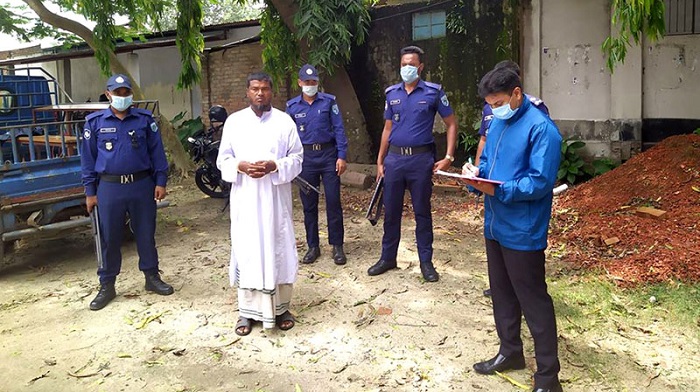 A khatib in Thakurgaon Sadar Upazila has been jailed for misappropriating grant money for a mosque provided by Prime Minister Sheikh Hasina.

The khatib was identified as Md. Joynal Abedin alias Mandol, 40, son of Towaz Sheikh, of Shukhanpukuri union of the upazila, a union leader of Islamic Foundation and also the khatib of the Bangrol Bujharipara Mosque.

Prime Minister allotted Tk 5,000 for each mosque of the country due to the ongoing corona situation.

Thakurgaon Sadar Upazila Nirbahi Officer (UNO) distributed money Prime Minister’s aid to 1,140 mosques of the upazila including municipality area through Islamic Foundation (IF) before Eid. Representatives of IF distributed that money to the respective mosques.

IF union leader Joynal Abedin received PM’s aids for the mosques under his jurisdiction and distributed the money to the mosque authorities. But he did not give allotted Tk. 5,000 to each mosque. Some mosque got Tk 2,000, some got Tk 3,000.

Moreover, he withdrew Tk 30,000 more from Islamic Foundation by submitting the false names of six mosques and embezzled them.

After the misappropriation of money came out in public, on Monday night, Union Parshad Member Amzad along with locals caught Joynal and confined him at the union Parishad office.

Joynal admitted his faults as he was brought before a mobile court on Tuesday.