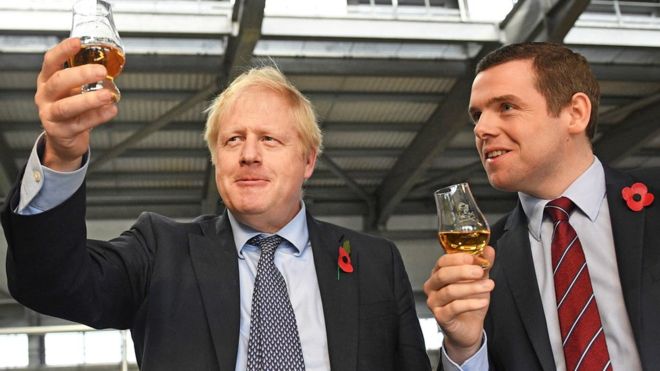 Junior minister Douglas Ross has resigned after Dominic Cummings' defence of his trip to County Durham during the coronavirus lockdown.

Mr Ross, Under Secretary of State for Scotland, said the senior aide's view of the government guidance was "not shared by the vast majority of people".

Mr Cummings has explained why he drove 260 miles in March from his home to his parents' farm with his wife and child.

No 10 said the prime minister regretted Mr Ross' decision to stand down.

In a statement announcing his resignation, Mr Ross, MP for Moray, said: "While the intentions may have been well meaning, the reaction to this news shows that Mr Cummings interpretation of the government advice was not shared by the vast majority of people who have done as the government asked."

"I have constituents who didn't get to say goodbye to loved ones; families who could not mourn together; people who didn't visit sick relatives because they followed the guidance of the government.

"I cannot in good faith tell them they were all wrong and one senior adviser to the government was right."

A No 10 spokesman said: "The prime minister would like to thank Douglas Ross for his service to government and regrets his decision to stand down as Parliamentary Under Secretary of State for Scotland."

Cummings has faced calls to resign after it emerged he had driven his child and ill wife from London to County Durham during lockdown.

At a news conference in the garden of 10 Downing Street on Monday afternoon, he said he did not regret his actions. and believed he acted reasonably and legally.

On the subject of why he then drove his family to the town of Barnard Castle - 15 days after he had displayed symptoms - Mr Cummings said he was testing his eyesight to see if he could make the trip back down to London. He explained that he had experienced some eyesight problems during his illness.

Earlier on Tuesday, Cabinet Office Minister Michael Gove said Mr Cummings' account of his actions was "exhaustive, detailed and verifiable" and "people will make their own mind up".

Boris Johnson has said he regrets the "confusion and anger" caused by the row, but he has continued to back Mr Cummings.