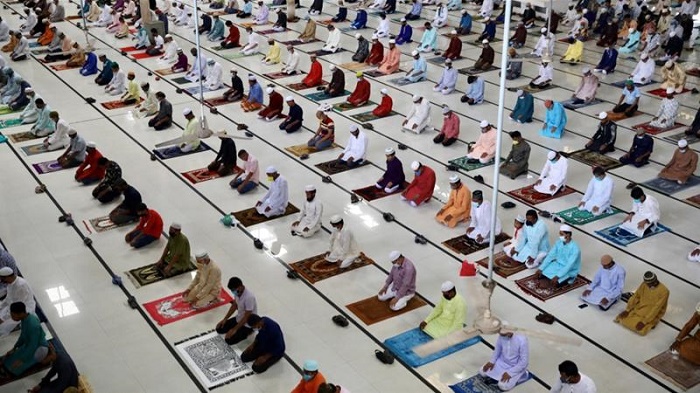 Millions of Muslims in the two nations celebrate the end of the holy month of Ramadan under the shadow of the pandemic.

The three-day holiday that begins with the sighting of the moon is usually a time for travel, family gatherings and feasts after weeks of dawn-to-dusk fasting.

But this year, Muslims were praying at home, their celebrations quieter and touched with worry about the virus and the effect of the lockdowns and other restrictions put in place to try and curb the spread of COVID-19, the highly contagious respiratory disease caused by the new coronavirus.

Outside New Delhi's iconic Mughal-era Jama Masjid, closed as part of a ban on religious congregations, security officers patrolled the streets and almost all shops were closed barring a sweets shop.

Police made rounds on motorbikes and a mini police camp stood just outside a gate.

"It's been 1,400 years since the Islam religion was founded ... even our elders could never imagine that we will have to celebrate Eid in such a way," businessman Shehzad Khan told The Associated Press news agency.

He said money typically spent buying new clothes to wear for Eid was sent to the poor, who have lost livelihoods due to the virus and the measures taken to contain it.

"That money we have given them so that they too can celebrate Eid with us," Khan said.

On Monday morning, those praying in the country's more than 300,000 mosques wore masks, and many wore gloves as well.

In the capital Dhaka's main Baitul Mukarram mosque, thousands joined the prayers in phases as authorities allowed them to enter in groups and prayers were held every hour.

Many waited in lines for more than an hour to enter the premises.

"This is a new experience. We never felt like this," government official Abdul Halim told The AP news agency after attending the prayer.

"I did not bring my two sons for the prayers, they are staying home. My family could not visit my parents this time," he said.

Across the two countries, government and religious leaders appealed to Eid celebrants to follow lockdown norms and maintain a safe physical distance.

India has climbed to among the world's largest coronavirus outbreaks with more than 138,000 cases and 4,000 deaths.

It has eased its strict lockdown in recent weeks, including allowing domestic flights to resume starting Monday.

"Eid Mubarak!" Modi tweeted. "May this special occasion further the spirit of compassion, brotherhood and harmony. May everyone be healthy and prosperous."

New cases and deaths from COVID-19 are rising in Bangladesh, which has confirmed 35,585 cases and 501 deaths.

"Your safety is in your hands. Remember that if you remain safe, you are also keeping your family, neighbours and the country safe," she said in an address to the nation.