Eid-ul-Fitr being celebrated in Khulna 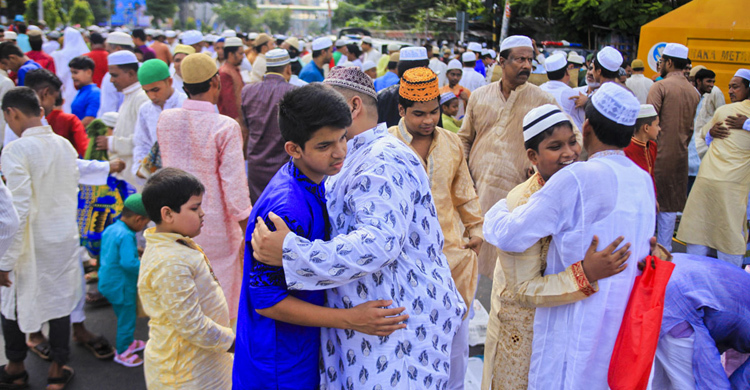 Eid-ul-Fitr is being celebrated in the city and district as elsewhere in the country here today with due religious fervor as Eid jamaats were held in the mosques instead of open spaces to curb the coronavirus spread as per the directives by Islamic Foundation.

The first Eid jamaat was held at 8.00 am in the mosque conducted by its Khatib Maulana Mohammad Saleh. The second jamaat was organised at 9 am and the third and last one was held at 10 am at the same place.

This year Eid congregations have been decided to be held in the mosques instead of open spaces to stem COVID-19.

The Mosque authorities were asked to follow the corona related instructions by the government including maintaining physical distancing considering the risk of Covid-19 transmission.

Every devotee was asked to wear a mask and carry their own jainamaz and tupee instead of using those remaining in the mosques.

Soaps and hand sanitisers were kept at the mosques entrance for devotees to clean their hands before entering the mosque premises.

Social distancing measures and health directives were followed when standing in the jamaat for Eid prayers following the guidelines of the Islamic Foundation.

The national flag was properly hoisted in all government, semi-government, private, autonomous institutions and buildings in the morning and it will be lowered before sunset.

Special meals are being served in different hospitals, prison, government children’s homes as well as vagabond and distressed welfare centers here on the occasion of Eid.

Similar directives are being followed in the upazilas as well.