Eid-ul-Fitr being celebrated in Rangpur 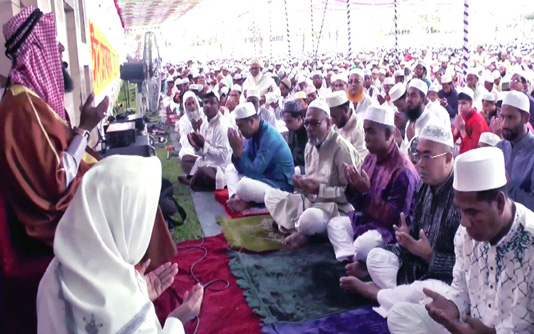 Eid-ul-Fitr, the greatest religious festivity of the Muslims, is being celebrated with due religious solemnity today in favourable climate conditions amid the coronavirus (COVID-19) situation.

As per directives of the government, the Muslim devotees offered Eid-ul-Fitr prayers at different mosques in the metropolis and across the district maintaining physical distance, wearing masks and abiding by the health rules.

Following instructions of the Islamic Foundation and local administrations, arrangements of hand sanitizers were made available at the entrances of mosque and no congregations were arranged in the Eidgahs anywhere in the district.

As per the decisions taken by the authorities of different mosques, the Muslim devotees stood in every second row leaving one row in the middle in the places of prayer maintaining three feet distance.

Mayor of Rangpur Mostafizar Rahman Mostafa offered the Eid-ul-Fitr prayers at Jamia Arabia Zin-nuraine Madrasa, Orphanage and Lillah Boarding Mosque in Khamar area in the metropolis at 8:30 am.

The biggest Eid-ul-Fitr congregation of the district was held at Rangpur Keramotia Jam-e-Mosque and its premises in the metropolis at 9 am strictly maintaining physical distance and abiding by the health directives.

At most of these biggest mosques, the Eid-ul-Fitr prayers were offered twice or thrice in phases between 8 am and 10:30 am depending on the numbers of the devotees.

Besides, a number of the Muslim devotees participated in the Eid-ul-Fitr congregations in phases maintaining physical distance, wearing masks and abiding by the health directives at the mosques at the upazila towns and rural areas.

The Musollis (devotees) offered special munajat seeking divine blessings for eternal peace of departed souls of their relatives, respite from the COVID-19 pandemic and continued peace and prosperity of the country, its people, Muslim Ummah and whole humanity.

Talking to BSS at 2 pm, Divisional Director of the Islamic Foundation Mohiuddin Chowdhury thanked the devotees for abiding by the government’s health directives while offering Eid-ul-Fitr prayers across the district.

“The Muslim devotees offered Eid-ul-Fitr prayers today at 6,015 mosques in the district, including 790 mosques in Rangpur metropolis, with due religious fervour and solemnity,” Chowdhury added.