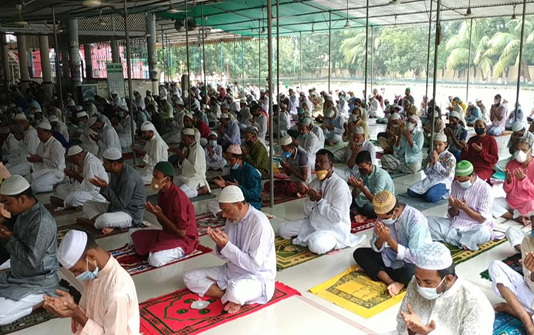 The main jamaat (congregation) for holy Eid-ul-Fitr prayers in Rajshahi city was held at Hazrat Shah Makhdum (r) Dargah Mosque at 8 am through complying with the government directives amid the novel coronavirus (COVID-19) pandemic.

This year, the city’s main Eid congregation was not held at the conventional Hazrat Shah Makhdum Central Eidgah for the first time in its history due to the coronavirus (COVID-19) outbreak.

The second one was held at the same mosque at 9am. Assistant Imam of the mosque Hafrez Rajaul Karim conducted the jamaat.

Shariful Islam, Member of Hazrat Shah Mukhdum Dargah Trustee Board, said they took adequate preparations for holding the today’s Eid-jammat through complying with the government directives properly amid the present adverse situation.

Thousands of musallis at the end of Eid jamaats offered special munajats seeking divine blessings and eternal peace of departed souls particularly their near and dear ones, continued peace, progress, and prosperity of the country and as well as greater welfare of the Muslim Ummah.

He said need-based steps were taken so that all the mosque committees arranged Eid-jamaat through complying with the directives in the greater interest of the public in general.

Side by side with the district administration, all the government entities concerned including Islamic Foundation worked hard to this end, he added.