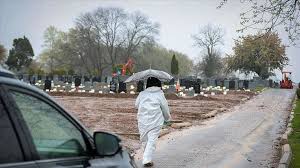 On its Sunday edition front page, the New York Times put up names of 1,000 people who died of coronavirus in the US.

The number reflected just one percent of the toll, reports Xinhua.

"They were not simply names on a list. They were us," the paper said. "Numbers alone cannot possibly measure the impact of the coronavirus in America, whether it is the number of patients treated, jobs interrupted or lives cut short."

"Toward the end of May in the year 2020, the number of people in the United States who have died from the coronavirus neared 100,000 -- almost all of them within a three-month span. An average of more than 1,100 deaths a day," said the cover story, which was printed on four full pages including the cover.

"Why has this happened in the United States of 2020? Why has the virus claimed disproportionately large number of black and Latino victims? Why were nursing homes so devastated? These questions of why and how and whom will be asked for decades to come," said the report.

"For now, all we can do is hold our collective breath, inch toward some approximation of how things were -- and try to process a loss of life greater than what the country incurred in several decades of war, from Vietnam to Iraq," it added.

More than 97,000 people have died from coronavirus in the US, the largest toll among all the countries in the world, according to the Center of Systems Science and Engineering of Johns Hopkins University as of Monday morning.

COVID-19, first reported in China in December last year, has infected 5.4 million people globally – 1.6 million in the US alone, according to JHU.

The virus has so far killed 345,059 people. These are only the officially confirmed numbers and health experts say there are many more patients in reality.

Bangladesh has been recording a number of rising cases in recent weeks. On Sunday, the health authorities reported detection of 1,532 new cases, taking the local tally to 33,610, and 28 more deaths, bringing the number of victims to 480.

With the government allowing people to travel to their village homes during the Eid holidays, health experts say they fear that the number of cases and deaths will rise in coming days.

In her address to the nation on the eve of Eid, Prime Minister Sheikh Hasina requested everyone to stay home and celebrate the occasion with their families.