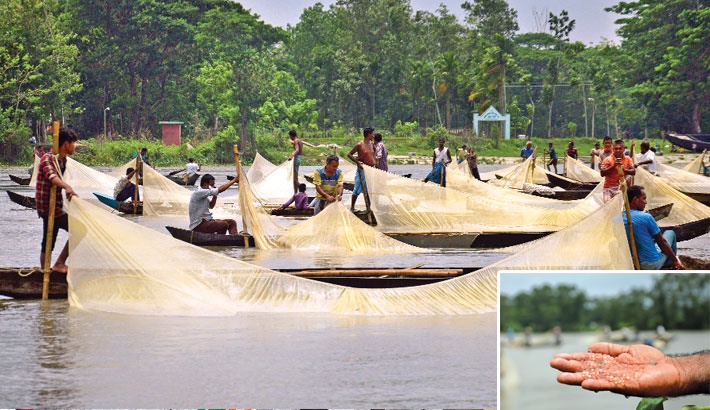 Egg collectors, who were eagerly waiting for the moment, collected around 25,536 kilograms of egg, which is the highest in the last 12 years, sources said.

A festive mood was prevailing on the banks of the river centring collection of the eggs. Some 615 egg collectors on around 280 boats collected eggs from the river throughout the day.

“I am collecting egg with six boats and the quantity of the catch can be confirmed after completion of netting them,” he said.

All the government and non-government hatcheries are kept ready for producing fry from the collected eggs, he said.

The amount of the collected egg increased significantly due to strict monitoring and some measures taken to save the natural fish spawning centre, said the UNO.

“We carried out frequent drives to check netting of the mother fishes, movement of mechansied boat and dredger, and pollution in the river,” he said.

Halda Researcher, Halda River Research Laboratory Coordinator and Chittagong University (CU) Zoology Department Professor Md Manzoorul Kibria said the quantity of egg increased due to coordinated efforts by all concerned. “We expected a good catch this year due to less pollution for closure of nearby industries following the general holidays over coronavirus pandemic,” said the researcher.

Besides, prompt activities by the upazila administration and the IDF for resisting netting of mother fishes and destroying fishing nets played significant role for the achievement, he observed.