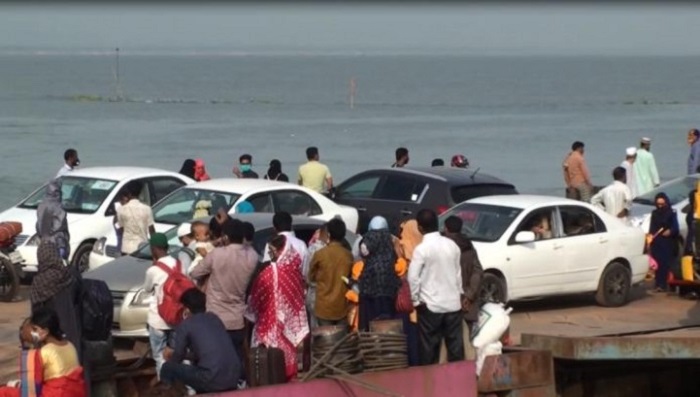 Owners and drivers of microbuses, private cars, CNG-driven three-wheelers in the city have an opportunity of earning sudden money as private vehicles have been allowed to cross district lines.

Eid holidaymakers also have relief of sigh just a few days ahead of the Eid-ul-Fitr as they can move towards village homes though it cost them three to four times higher fares than normal charge.

On Friday morning, Director General (DG) of Rapid Action Battalion (RAB) Chowdhury Abdullah Al Mamun announced that people can go to their village homes in their private vehicles on the occasion of Eid-ul-Fitr but public transport cannot be used.

After this announcement, lines of hundreds of microbuses, private cars CNG-Auto rickshaws were seen in different points—Gabtali, Amin Bazar, Abullahpur, Sayedabad, Jatrabari, Poostogola—in the capital to carry homegoers to their destinations.

Sources form different points told daily sun that homegoers, who traveled to Panachagar, Thakurgaon, Dinajpur, Rangpur, Rajshahi, Mymensingh, Madaripur, Barishal by a micro, have to pay a minimum of Tk 2,000 to a maximum of Tk 3,000 each person.

Holidaymakers, who want to go a short distance like Maowa by micro, paid Tk 500 each, and CNG auto-rickshaws were carrying five persons and realising Tk 300 for each passenger as the fare for that distance.

In a bid to protect the further spread of coronavirus infection, the government had been put strict restrictions on public movement since Sunday last so that no one can leave Dhaka ahead of the Eid-ul-Fitr festival.

Law enforcers had been facing huge troubles to stop people from traveling to their village homes as hundreds and thousands of people came out for leaving Dhaka.

Police set up check posts at different entrance and exit points of the capital to stop people from traveling outside Dhaka. They fined many people and also returned back many homegoers in last few days, but could not stop all homegoers from leaving Dhaka.