Over half of returnee migrants in need of financial aid now: Brac 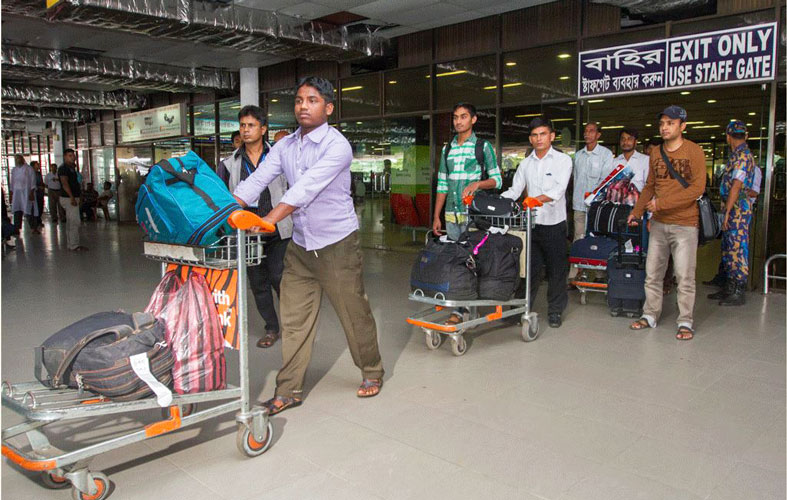 A survey released by Bangladesh-based international development organization Brac on Friday reveals 87 percent of the country’s returnee migrants- amid the COVID-19 pandemic - are still struggling without any source of income in their changed circumstances.

More tellingly, 52 percent of the returnees said they need financial aid on an emergency basis, said Shariful Islam, head of Brac’s migration programme in a virtual meeting with journalists where the findings of a Brac survey titled ‘The Impact of COVID-19 Pandemic on the Life and Livelihoods of Returnee Migrants,’ were disclosed.

A third of the returnees, or 33 percent, said they can afford their living expenses for three months or a bit more, based on their present financial condition.

Brac, over mobile phone, conducted the survey among 558 immigrant workers, who have returned home from different countries.

However, among the survey attended, 86 percent returned home in March.

Among the total survey respondents, 33 percent said they can afford living three months and a bit more with their savings, while ten percent informed that they have had to borrow money already to meet the daily needs.

However, 14 percent of the survey respondents refrained from disclosing information about their savings.

What’s the plan of home returnees?

Among the home returnees, 84 percent confirmed that they have not yet planned for any livelihood while six percent of them said that they are planning to go abroad again, said Brac survey.

Rest of the ten percent of the survey attendants said they have been planning to get involved in agriculture-based small business, grocery shops or something else, Shariful Islam said.

Why did immigrant workers return home during COVID-19 pandemic?

Meanwhile, seven percent of the participants said their homecoming had no relation with COVID-29, the Brac survey reveals.

According to Brac survey, 74 percent of returnees informed that they have been living in worry, mental pressure, and fear.

According to Brac survey, 29 percent of the attendants informed that their relatives, neighbours did not take it normally as well as show no attitudes of help.

Meanwhile, 97 of the returnees said their own families played role in helping them.

Did returnees get government help during pandemic?

The Brac survey reveals that 91 percent of the returnees got no government or private help.

Brac’s representative Shariful Islam said “Many people may return home after losing their jobs in the future and the government has announced easy loans for them.”

Government alone is not responsible to stand by returning immigrant workers, but non-government organisations should work in concerted way, Shariful added.

He also said that immigrant workers sent $109 crore worth TK 9,500 crore in the first 19 days of May for Eid-ul-Fitr.

Five recommendations by Brac to resolve the crisis:

1. More Inclusive and supportive environment should be ensured for the returnees by the cumulative efforts of the government, civil society organizations, private sectors and local communities instead of stigmatization and discrimination which can negatively impact the ability of migrants to integrate into the society.

2.  Government should extend social protection coverage and safety net programmes either in the form of cash or in-kind goods and services to smooth consumption and prevent falls into the poverty.

3. Sustainable reintegration programme including psycho-social support should be launched for the returnees assessing their short- and long-term vulnerabilities and making easily accessible customized loan products to upon return of expatriate workers for engaging them into the income generating activities

4.  Government should start negotiation with the destination countries, to stop forced return of the expatriate workers during the time of COVID-19; and through the diplomatic initiatives, visa and work permit of the returnees should be extended for them who are unable to fly back to workplace because of the travel restriction.

5. Government should increase budget allocation for the expatriates' welfare and overseas employment ministry to ensure the welfare of the migrants and their family members and emphasize their inclusion into the government programme and policies in responding to the shock of COVID-19 pandemic.