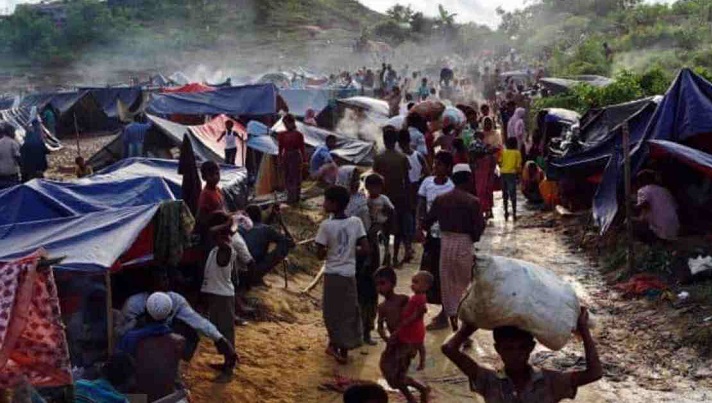 In a stinging rebuke, Foreign Minister AK Abdul Momen on Friday said the opposition of foreign aid agencies to the government’s scheme of relocating the Rohingya refugee population to Bhasan Char is not in the interests of the distressed population, but rather their own officials’ expectations of inconveniece relocation to Bhasan Char noting luxury hotel facilities in Cox's Bazar as one of the reasons.

“It is very short drive from Rohingya camps to Cox's Bazar and its 4-5 star hotels, where they sleep and gossip after returning from work at 3pm,” Dr Momen said, implying the aid agencies opposition was tied to losing this rather cosy-sounding worklife.

More importantly, the Foreign Minister indicated the Rohingyas themselves stood to turn around their miserable camp existence in Bhasan Char, located in Hatiya upazila 37 miles from the coast.

"If Rohingyas go to Bhasan Char, they can do the same things there that they used to do in Rakhine State. They can do economic activities like fishing, cattle farming and agricultural activities," Dr Momen said, speaking from his residence.

He said Bhasan Char is a nice place that offers many ‘opportunities’ - something almost unheard of in the camps.

"Aid agencies are unhappy. They cited communication problem," the Foreign Minister said, adding these agencies could in that case spend the funds to introduce the better communication and transport services they require. as they have no fund crisis.

The Foreign Minister said Rohingyas are living in very congested camps and they have to worry about landslides during rainy season. "If anybody dies, blame falls on our shoulder."

He said all countries and rights bodies look to Bangladesh whenever is a problem in the Andaman Sea or Indian Ocean (of stranded Rohingyas at sea).

"As if we have sheltered 1.1 million Rohingyas and we will have to give shelter to others, too," he said.

The Foreign Minister reiterated that Bangladesh has no space to accommodate more Rohingyas, and that other countries also have the responsibility to share the burden.

"Rohingya crisis is not our problem, it's a global problem. Those countries which always advise us can take Rohingyas. They have no space crisis," Dr Momen said.

Fortify Rights, an international NGO working with the Rohingyas in the camps in Cox’s Bazar recently claimed that Bangladesh authorities are currently holding in quarantine at least 300 Rohingyas on Bhasan Char.

“The government should do everything in its power to prevent an outbreak," said Matthew Smith, Chief Executive Officer at Fortify Rights. “Bhasan Char is not a viable option for any COVID-19 response.”

Referring to his recent meeting with European Union Ambassador to Bangladesh Rensje Teerink, Dr Momen said he urged the Ambassador to take Rohingyas to their countries if they truly want to give them a better life.

On May 20, the Foreign Minister held a meeting through videoconferencing with Ambassadors of Denmark, France, Germany, Italy, The Netherlands, Norway, Spain, Sweden, Switzerland, and the European Union Delegation in Dhaka.

He assured that the Government would always protect the Rohingyas who have taken shelter in Bangladesh. In this regard, he stressed that providing shelter to Rohingyas was not the responsibility of Bangladesh alone.

Dr Momen called upon the Ambassadors to share the burden of providing better life and living for persecuted Rohingyas in their own countries or relocate and settle them in third countries.

He said almost three years have passed and although Myanmar agreed to take them back, not a single Rohingya went back home yet.

Dr Momen appealed to them to exert more pressure for their safe repatriation to Myanmar. The EU Ambassadors reiterated their appreciation for the humanitarian gesture by Bangladesh for the cause of the Rohingyas.

Dr. Momen reiterated that EU members are Bangladesh's long standing reliable development partners and if they have any issue, they are most welcome to share those with the government.

However, he reminded them that Bangladesh per capita income is around 2000 US dollars with a density of population around 1200 per sq. mile.

Bangladesh's situation is different to that of the EU where their per capita income is around 50,000 dollars and density of population is as low as 15 per sq. mile, Dr Momen said. "Therefore, one must be pragmatic."

On the issue of cell phone network in the Rohingya camps, Dr. Momen explained that the functionaries would be able to access the internet and 4G services from their offices and accommodations. For security reasons; to stop drug trafficking, to stop trafficking of women and children, provoking people to create lawlessness and to stop Blue films, the government has to downgrade 4G services in the Camp area.

However, they have 2G services which is enough for day to day communications. Moreover, for 4G facility, Rohingyas cannot afford to buy the Cell phone sets as these are 5 to 10 times more expensive vis-a-vis 2G cell phone sets.

Foreign Minister thanked the European countries for the support, and emphasised that it is important to ensure transparency and accountability of the aid activities carried out by the development partners.

They should disclose publicly their spending so that tax-payers know where their tax money is being spent, he said.