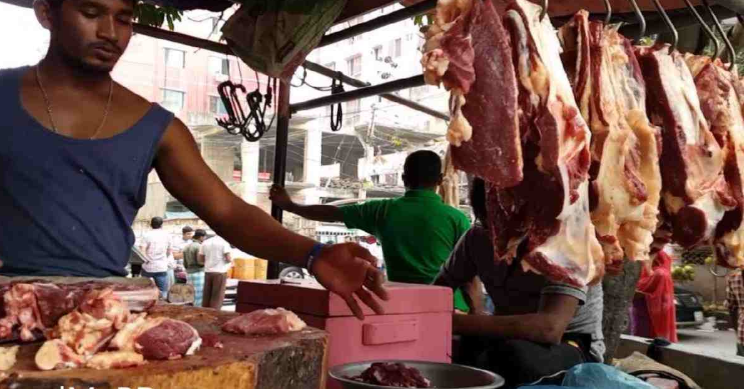 Supply chain disruption and temporary closure of businesses amid a government-announced ‘holiday’ to curb coronavirus transmission have pushed up meat prices by as much as Tk 250/kg in Dhaka.

The city corporation set the highest price of each kg local beef at Tk 525, mutton at Tk 750, and buffalo at Tk 480 for Ramadan.

He blamed the lack of monitoring for the situation. “Consumers have to suffer all the time. We don’t have any income now but we must purchase food at high prices to eat. The traders only care about profit,” he said.

Jannat Begum, a resident of Najirabazar, said she bought chicken at Tk 120 a kg 10 days ago. “But now, the broiler chicken costs Tk 180,” she said.

Old Dhaka meat trader Aminul Islam said the prices of the meat went up several time in the last two weeks. “Small boiler businesses were closed during the long holidays. The prices increased due to supply crunch,” he said.

Aminul said boiler poultry farmers lost much money at the beginning of the coronavirus pandemic and now they are trying to make up for the losses ahead of Eid.

Kaptanbazar meat trader Salman said they were selling each kg beef at Tk 580-620 based on quality. A kg of Australian cattle meat costs Tk 580 but local beef is sold at more than Tk 620.

“It’s tough to sell meat as per the city corporation’s guideline as cattle price is high. It might increase further during Eid vacation,” he said.