More than 30,000 pubs and restaurants 'may not reopen after lockdown' in UK 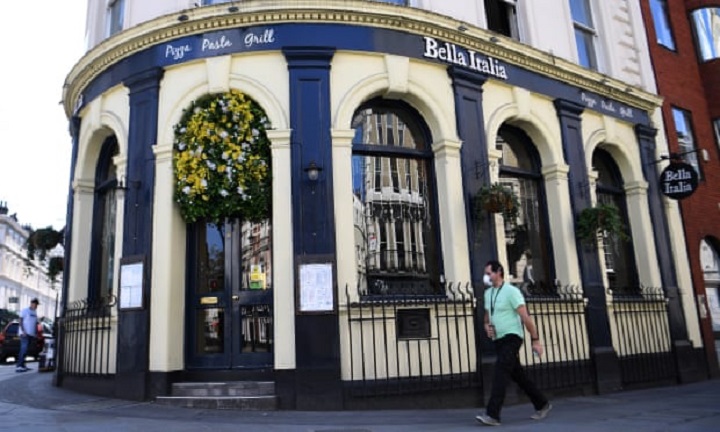 More than 30,000 pubs, bars and restaurants may remain permanently closed because the coronavirus shutdown has sent a wrecking ball through the UK’s hospitality trade.

The grim prediction follows a week in which the Casual Dining Group, which owns the Bella Italia and Café Rouge restaurant chains, warned it was headed into administration – casting doubt over the future of its 250 restaurants.

The enforced period of closure could be the final straw from some business operators who were having a tough time before the crisis hit. About 2,800 bars and restaurants closed down in the 12 months before the lockdown began.

The 2.4% fall in the number of licensed premises in the year to the end of March was recorded by the CGA AlixPartners market recovery monitor, which now expects the decline to worsen once the hospitality sector begins to reopen at the start of July.

CGA group chief executive Phil Tate said: “Industry estimates of the scale of closures vary widely, from below 10% to as high as 30% of total sites. The challenge for business owners will be to understand not just how long the casualty list will be, but which will be the worse hit areas and how individual sites will pivot to new styles of operation.”

Many pub operators have called for the two-metre distancing requirements to be relaxed, arguing they cannot be profitable at that distance and will therefore not reopen. The British Beer and Pub Association has said that the two-metre rule means that only one in five pubs will be able to restart, while one-metre distancing would allow most to reopen. A recent survey of BBPA members found that 19,000 out of the UK’s 47,000 pubs believe they may be unable to reopen.

Graeme Smith, the managing director at AlixPartners, said: “Many operators have got their tape measures out to assess the impact of social distancing restrictions on operations and capacity. Even with well-configured space, cover counts will be meaningfully reduced and may prompt further questions on whether it is sensible to reopen, or not, from a profit perspective.”

Two-thirds of the UK’s 115,108 licensed venues are independents, with the rest belonging to groups. The monitor figures point to the special vulnerability of casual dining restaurants. With many located in shopping centres and near office blocks, analysts think their trade may take longer to bounce back.

A number of casual dining chains have already been forced into dramatic retrenchments after an investor-fuelled expansion boom ended in tears. Last year Jamie’s Italian all but disappeared while the rescue deal being brokered for the Carluccio’s Italian dining chain is expected to save just 30 of its 77 outlets.

The report suggested that local pubs and restaurants which have also fallen out of favour – with community pub numbers declining 3.7% in the same period – could emerge as winners from the crisis as consumer points to the public’s preference to return to local establishments before heading back to city and town centres.