‘His leadership will be key to us’: Graeme Smith wants Sourav Ganguly as ICC Chairman 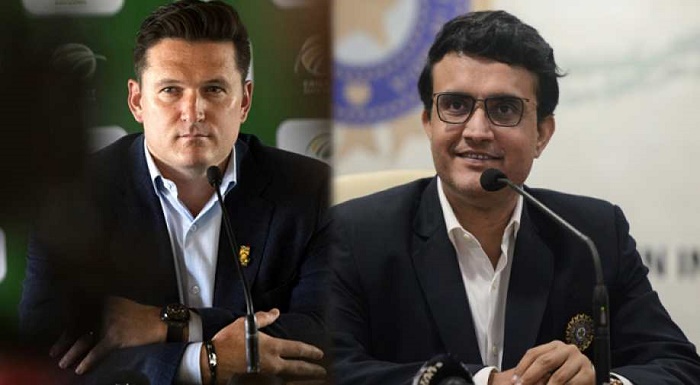 Cricket has been put on hold during this coronavirus pandemic. The International Cricket Council is trying to work out solutions for the resumption of cricket and is holding regular meetings regarding the subject. All eyes are on India for getting cricket back on its tract as they are the financial powerhouses of the sport. Countries like Australia and South Africa are looking for India to tour their countries to give them a financial boost.

Cricket South Africa (CSA) director of Cricket Graeme Smith even wants Sourav Ganguly to take over ICC chairmanship in this tough period for cricket. Currently, ICC is headed by former BCCI president Shashank Manohar and his period is set to end this month.

Smith’s comments were backed by CSA CEO Jacques Faul, who also said that South Africa won’t have any objection to an Indian again heading the ICC.

“From our perspective, it would be great to see a cricket man like Sourav Ganguly maybe getting into the President’s role of the ICC,” Smith told reporters on Thursday.

Manohar could get a two-month extension due to current situation. England and Wales Cricket Board’s former chairman Colin Graves was the favourite to succeed Manohar but Smith’s comment has given an interesting lot twist.

Smith further said that Ganguly’s vast knowledge of the game would be helpful if he is the boss of the global cricket body.

“I think leadership in our sport going forward is going to be key and I think having someone at a level that understands the modern game and the challenges we are going to face going forward emphasises more the people that get put into key positions,” Smith said.

“Having dealt with Sourav for a long time, I think that the President of the ICC now becomes a very key position going forward in terms of how the game can progress at the right level.”