‘Cut off Dhaka from rest of the country’ 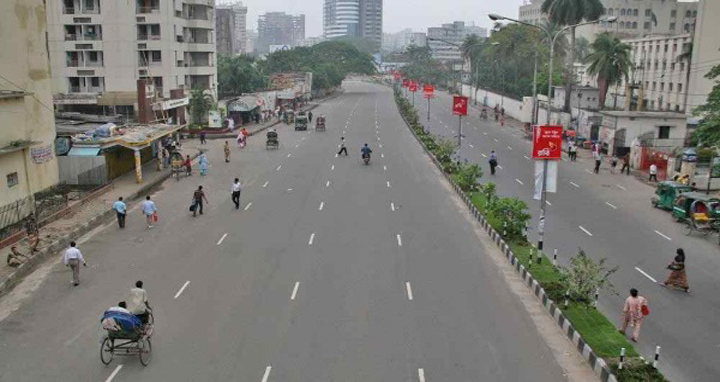 Capital Dhaka should be cut off soon from the rest of the country in a bid to prevent further spread of the deadly coronavirus, health experts have suggested.

As the number of corona patients is increasing day after day, there is no alternative to cutting off Dhaka from other parts of the country to combat the disease, they observed.

Without stopping the public movement from one place to another, it is quite impossible to contain the coronavirus spread, they said.

But, many city-dwellers have been desperate to return home from Dhaka since Sunday ahead of the Eid festival.

Due to the closure of public transport, people are seen returning from the capital by truck, vans, cars and even motorcycles.

Although police were seen active in all exit points of the capital in implementing the 14-point directive of the government.

Policemen were in a very helpless condition due to various logical and irrational reasons of the people to leave the capital.

Police check posts have been set up to stop traffic, but people are eager to return home by walking through these check posts.

Going beyond the check posts, people get into pickup vans, cars, motorcycles, trucks and other vehicles to leave the city.

Police have been seen helpless in this situation. Check posts are in a state of disorder due to the influx of millions of people.

Earlier on May 14, cabinet division, in a circular, stated that movement of people will be restricted from May 17 to May 28 and local administrations along with law enforcers will control the movement so that people cannot move from one district to another or one upazila to another.

The order also said movements of all public transports on roads, passenger carrying vessels in the waterways, trains and domestic flights are prohibited till May 30 (during the general holiday).

At the same time, the authorities concerned have been instructed to strictly control vehicles other than those engaged in freight and emergency services on the highway.

Mozammel Hoque Chowdhury, secretary general of Bangladesh Jatri Kalyan Samity, told the daily sun: “Every year, more than 30 million people from major cities of the country, including the capital, travel to their respective village homes to enjoy Eid holidays with their relatives.”

But, this year the situation is totally different as the coronavirus cast a pall over everything, he added.

He said, “Over the last few days, we have seen that many people are seen leaving the capital, like in the previous years, using various types of transport as restrictions on public transport remain in place.”

Such a situation has raised the risk of the coronavirus transmission across the country, he added.

To keep the coronavirus crisis from worsening, Mozammel urged the government to impose a 10-day curfew before and after Eid.

Inspector General of Police (IGP) Benazir Ahmed on Tuesday said “We observed that many people are trying to return to their villages in different ways, disregarding government’s instructions. Some are even traveling on foot. There is a big risk of contracting coronavirus for these people.”

“This is why we are urging you to stay where you are. This is not the last time when you can go home for Eid. If you survive the pandemic, there will be many more in the future,” he added.

The IGP said: “Warning signal number 3 has been hoisted at ferry terminals, but people are crowding these places and trying to cross the river by risking their lives.”

“We have asked the River Police to stop this. We will ask those who have already boarded the ferries to come back. If necessary, the police will arrange their return,” he stated.

On Monday evening, millions of people flocked to all the points of departure from Dhaka. Since Sahri, it seems that the police are not going to stop people with any obstacle.

Police have set up a check post at Gabtoli and Aminbazar Bridge. While visited the check post on Tuesday morning, this correspondent saw that police blocked the way out of Dhaka at Aminbazar Bridge near Gabtoli bus terminal. As a result, those who left Dhaka for Savar are stuck.

In the meanwhile, homebound people are leaving Dhaka on foot. Many are getting out of their cars, crossing the check post and leaving Dhaka in other vehicles.

Amirul Islam, who was on his way to Natore by motorbike, got caught in a police check post before Aminbazar Bridge after managing to cross Gabtoli check post. The police sent him back to Dhaka.

He said: “I live in a house in Moghbazar area. I have already sent my wife and child home. In the whole of Ramadan, I am having trouble with eating. Eid is also coming so the mind is depressed. I was forced to try to go to Natore by motorcycle. But police stopped me.”

Mahmuda Afroz Lucky, Additional Deputy Commissioner (ADC) of Mirpur Darussalam Zone, said, “We are not allowing a single vehicle to leave without a valid reason. Traffic is being strictly controlled. Only freight and emergency transport are being exempted.”

“Those who are trying to walk are also being turned away. However, many people are trying to go through the alleys by cheating the check posts. In that case, it is difficult to keep an eye on them,” she added.

Dhaka-Chattogram and Dhaka-Sylhet highways are also under pressure from homebound people ahead of the Eid-ul-Fitr festival. Police are setting up check posts at various places on the highway, stopping vehicles and interrogating people. However, many people are crossing the check post on various excuses.

Kazi Md Saifun Newaz, assistant professor of Accident Research Institute at Bangladesh University of Engineering and Technology (BUET), told daily sun: “To stop the movement of people from one district o another strict lockdown should be implemented immediately so that people can’t leave Dhaka.”

“Now people will go to their village and after Eid they will come back again and that’s how they will spread coronavirus from one district to another,” he said.

“Due to the corona crisis, this year Eid celebrations will be not like previous year. Most of the garments are running now and I think the garments should not declared official holiday during the Eid. If people got official Eid holiday, they will desperate to go to their village homes,” he added.

On Tuesday, Bangladesh confirmed 21 more deaths from the novel coronavirus and 1,251 new cases of infection testing 8,449 samples in the last 24 hours.

With this, the death toll from the deadly virus has risen to 370 and the number of total infections stood at 25,121.

Additional Director General of the Directorate General of Health Services (DGHS) Prof Dr Nasima Sultana came up with the fresh figures at its daily online briefing.

She also said 408 coronavirus-infected people fully recovered in the country during the period.