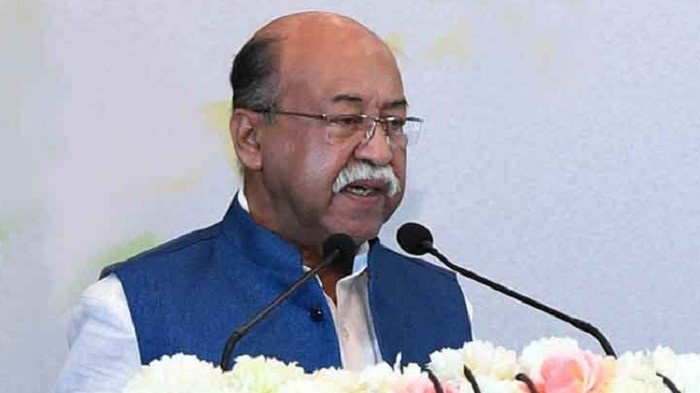 Industries Minister Nurul Majid Mahmud Humayun has said they have taken a series of steps for the modernisation of the country’s fertilizer companies.

“A new fertilizer manufacturing unit will be established in Ghorashal, costing Tk10,000 crore, and an agreement in this regard has been signed with Japan while other fertilizer factories are also running well,” he added.

The minister claimed that there is no scarcity of fertilizer in the country.

He went on to say that the ministry is also modernizing all the 16 sugar mills and exploiting its potentials.

“The machines of sugar mills are very outdated and the government is setting up new high-capacity machineries. Tender has also been floated for the modernisation of Thakurgaon North Bengal Sugar Mill.”

Besides, the minister said initiatives have been taken to harness the capacity of the mills through public-private partnership (PPP) basis so that these sugar mills do not have to count further losses.

A visionary leader Nurul Majid Mahmud Humayun has been focusing on generating new employment through modernisation of state-owned companies like fertilizer units and attracting foreign and local investment, thus working towards taking Bangladesh’s industrial sector to a new height.

Production has already started in Darshana Keru & Company following a concrete plan, and this company is producing coronavirus resistant sanitizer.

Mentioning the Prime Minister’s dream of manufacturing cars in the country, he said the ministry has made a plan to produce parts and car engines locally.

“The activities of our Steel Engineering Corporation-BSEC are also being expanded. Through Pragati Industry, we are now assembling cars in the country with the help of Mitsubishi of Japan.”

About the BSCIC, a major wing under the Industries Ministry, he observed that every industrial estate under BSCIC will be made as a model industrial hub across the country.

“Steps have been taken to establish small and medium industries in the BSCIC’s industrial estate in district level,” he said, citing an example of Bogura’s light engineering and SME industries.

Along with building a chemical village in Munshiganj, work is also going on to build the printing industry village. Besides, work is also under way to develop ship breaking industry – all contributing to the fulfillment of the dream of Bangabandhu under the visionary leadership of Prime Minister Sheikh Hasina.

Born in a noble Muslim family in Dhaka district on December 16, 1950, Nurul Majid Mahmud Humayun is one of the organisers of the great liberation war of Bangladesh and the legendary leaders of the Student Movement Council.

After his SSC and HSC, the minister obtained an MSS degree in Political Science and LLB from the University of Dhaka and was in involved in Awami League politics and also practiced law in Bangladesh Supreme Court. In the sixties, he was a veteran member of Ruchira Group, a power base of the then Chhatra League which played significant role against Ayub-Monem regime. As a student leader, he also played a courageous role in all democratic movement including the mass upsurge against the Pakistani autocratic ruler.

Nurul Majid Mahmud Humayun’s father Advocate MA Majid was the president of greater Dhaka District Bar Association and Bangladesh Bar Council Tribunal. His grandfather was the elected president of the Union Board of the undivided Bengal for a long time and served as Honorary Magistrate.

After the tragic incident of 15th August 1975, Nurul Majid Mahmud Humayun played a leading role in reforming the Awami Juba League in order to create mass movement demanding the trial of the killers of Bangabandhu Sheikh Mujibur Rahman and most of his family members.

He was one of the pioneers in organising the party against the killer of Bangabandhu and autocratic Military ruler Ziaur Rahman.

After the homecoming of Sheikh Hasina, Jubo Sangram Parishad was formed under the prudent leadership of Nurul Majid Mahmud Humayun who led the Jubo Chattra Sangram Parishad all over the country as its chairman.

He also organised mass movement, demanding the trial of the war criminals of 1971 including Ghulam Azam.

Nurul Majid Mahmud Humayun was elected fourth time as the Member of Parliament, and on January 7, 2019, he became the Minister for Industries of the Government of the People’s Republic of Bangladesh.