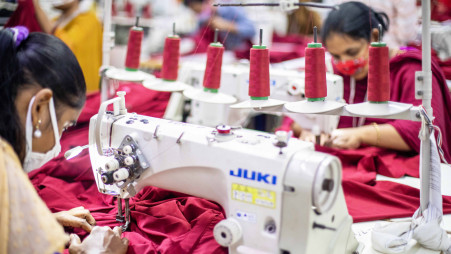 The government is exploring alternative markets to revive the country’s economy in the post-COCVID-19 situation by ensuring a stable supply of essential commodities and sustaining major export trade, including that of the RMG sector.

“We have already prepared a position paper on a potential world recession and its impact on the Bangladesh economy. We will share the paper with the major exporters and importers next Tuesday,” Commerce Minister Tipu Munshi told the Daily Sun over the phone.

The coronavirus pandemic will drive an additional 13 million people into poverty, cut 3.7 million jobs, take budget deficit to as high as 7.5 per cent and cause a minimum revenue loss of 2 per cent of GDP in Bangladesh, the Asian Development Bank (ADB) has warned.

The corona fallout might also cause price hike of essential commodities while the major export sector and ongoing mega projects may also be face stalemate as the corona crisis is shrinking economies and supply chains around the world.

Commerce Minister Tipu Munshi said the government has a plan to reduce dependency on import of essential commodities and raw materials of export items from a single country like China.

The government will prepare a priority list in this regard after a meeting with importers and exporters Tuesday next. Bangladeshi garment manufacturers import 65 per cent of the oven and 15 per cent of knitwear raw materials from China.

The RMG sector earned $12.44 billion from the oven sector last year. Any disruption in the supply of raw materials will directly affect the production cost and exports in the apparel sector.

According to government’s position paper, some 936 factories lost export orders worth $2.58 billion amid the COVID-19 outbreak across the globe.

To retain the rest of the work orders, the garment factories have been reopening in phases despite criticism.

Besides, Bangladesh is importing most of the essential commodities from India and China.

It will help to arrest the prices of essentials ahead of Eid-ul-Fitr and post COVID-19 period.

Bangladesh exports saw a record low in April 2020 followed by a hard hit in foreign remittance. Industrial and service sector suffered the most which may result in slowdowns and spurring unemployment of millions of workforces very soon.

On the flip side, some emerging economies like Vietnam, India and Mexico have been working to turn this crisis into opportunities. With growing mistrust over China and a step forward to diversify operational risk, countries like Japan, South Korea and Taiwan are shifting several of their investments in Vietnam.

In these backdrops, and transformation of global economies in a post COVID scenario and U.S – China relation, Bangladesh shall target to become the next destination of investments from Japan, South Korea, Taiwan and several other European countries.

Vietnam and India are already ahead in this race but given the macroeconomic stability and available resources in hand, Bangladesh can leverage on this crisis. China was a single sourcing country for developed economies around the globe which are going to inclined towards South Asian economies.

“We will discuss the private sector to take the opportunity for Bangladesh on Tuesday,” Commerce minister said.

Meanwhile, the growth of Bangladesh was unprecedented in terms of both economic and social perspective during the last decade. The country has registered GDP growth of 7.65 per cent year over year for the year 2018. The macroeconomic stability of Bangladesh was also admirable. The economy is also graduating from Least Developed Country (LDC) to a Developing Country in the scale of GNI Per Capita, Human Assets Index (HAI) and Economic Vulnerability Index (EVI) as set out by United Nations.

Much anticipated Padma bridge project is also very close to becoming a reality. The bridge will connect 21 southern districts through roads and railways ensuring mobility of people and resources across southern and northern parts of the country.