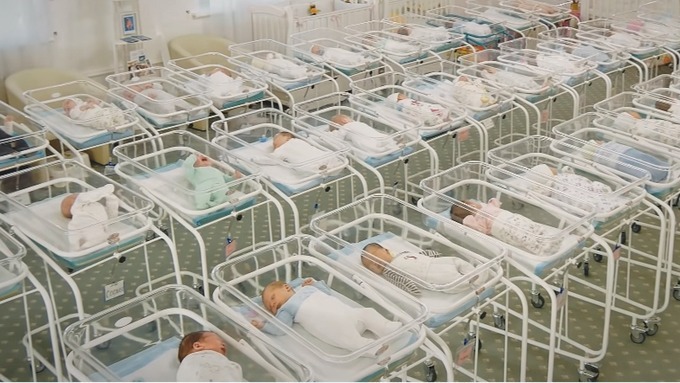 Ukraine’s human rights ombudswoman has appealed to authorities to find a solution for scores of infants born to surrogate mothers for foreign parents who are stranded because the country’s borders are closed under coronavirus restrictions.

Ukraine has a thriving surrogate industry and is one of the few countries that allows the service for foreigners. Concern is high that a long border closure will place a burden on clinics and distress the parents.

“About 100 children are already waiting for their parents in different centers of reproductive medicine. And if quarantine is extended, then it will not be about hundreds, but about thousands,” said ombudswoman Lyudmila Denisova.

The issue attracted wide attention after Biotexcom, the country’s largest surrogate operation, posted a video showing dozens of babies in bassinets arrayed in tight rows in two large rooms of the hotel where the clinic puts up clients.

The video aims to reassure absent parent that their little ones are receiving good care, showing nurses bathing and caressing them.

Denisova said there are 51 babies in all at Biotexcom, 15 of them under the care of parents who were able to make it into the country before the shutdown but can’t leave. Ukraine’s restrictions are to remain in place until at least May 22.

“The issue remains unresolved, but we are developing a mechanism to get out of the situation,” said Denisova, who met with Foreign Ministry representatives on Thursday.

Under the proposed mechanism, foreign parents would have to write a statement addressed to Denisova’s office, which would then contact the ministry with a request to give permission to enter Ukraine.