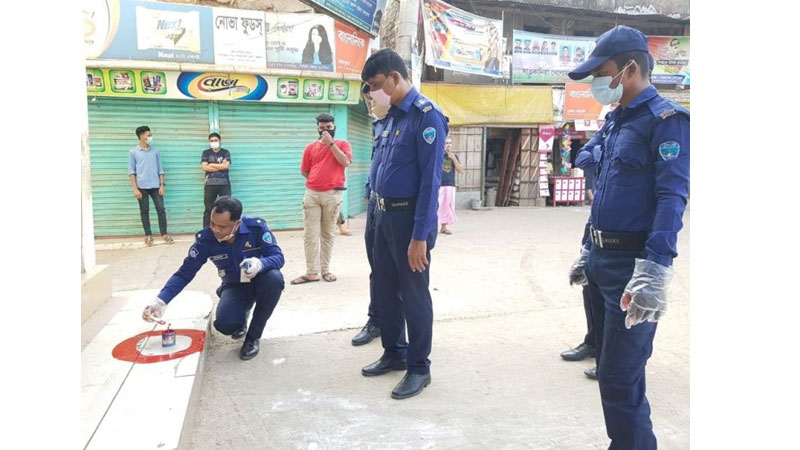 Amid the outbreak of coronavirus, the capital Dhaka on Thursday witnessed almost the previous traffic congestion as nearly all modes of transport hit the city streets.

Exercising the social distancing is a far cry from what was envisioned primarily to keep the coronavirus outbreak at bay.

Seeing the surroundings -- city roads, kitchen markets and shopping malls -- it appears that there is nothing like coronavirus pandemic in the country, and none is giving a damn to it.

With a good number of traffic turnout, streets of the capital Dhaka started reverting to their previous look on Thursday -- apprehensive of a rapid outbreak of coronavirus pandemic.

Many of them are wearing masks or gloves, but are failing to maintain enough distance from each other to conform to the coronavirus guidelines.

Abdul Karim, a grocer, said: “I closed the shop after the announcement of shutdown last month. But I needed to re-open it as I am concerned about my financial situation.”

Like the beginning of the shutdown days, law enforcers are now not seen in action mood to intercept the traffic in the capital.

Due to a virtual dilly-dallying attitude of the lawmen, people in droves are seen taking to the streets in the last few days, ignoring the corocavirus as well as lockdown, many pointed out.

People flocked to the streets, markets and tea-stalls as soon as the patrolling law enforcers left, while many came out for collecting relief items.

Imposition of total lockdown in many of the affected areas in the capital has also been lax as people were seen roaming around those areas and many shops also remain open, exposing people to further risk of infections.

Police said they were trying to enforce the lockdown regulations, but people often ignored their request and instructions.

Many people, however, were seen at Kataban, Farmnate, Karwan Bazar, Green Road, Palashi area of the capital defying lockdown instructions and most of them gave the excuse of going to hospitals or pharmacies.

The authorities are struggling to get people off the streets as Covid-19 is spreading from one place to another amid the extended shutdown till May 30.

Deputy Commissioner (media) Masudur Rahman said people in the affected areas were not following lockdown instructions and police had to remain patrolling the areas to enforce them.

Thousands of garment workers have been returning to the capital and industrial belt Gazipur from their native homes to join their workplace for the last few days.

Workers were also seen coming towards Dhaka and Gazipur from different districts, some on foot, as the readymade garments (RMG) factories have partially reopened recently amid the nationwide shutdown.

There is no arrangement to measure temperature at the entrance of all the markets while buyers seem to be unwilling to follow the hygiene rules.

Officials of Dhaka’s two city corporations said although they marked spots in front of the shops, people are not bothering about these.

Public awareness is important to maintain social distancing, they said.

A large crowd had been seen in the North Pirerbagh kitchen market on Thursday. Fish, vegetable and fruit shops have been set up on a 60ft section of the road. Even if the shops are set apart, the buyers are not keeping distancing at all.

Ashraf Hossain, a company employee who came to shop in the market, said not everyone is equally aware. Some are trying to maintain distancing on their own while many others are not giving a damn to it.

Some of them get angry if asked to maintain distancing, he added.

On Thursday, the government in a notification said, strict restrictions will remain on public transport and inter-district travels until May 30 during the extended shutdown.

Citizens have been asked to remain indoors, according to the notice issued on Thursday. People will be barred from leaving homes, except for emergency purposes, between 8 pm and 6 am, it added.

Law enforcers will control movement strictly so that people cannot move from one district to another and one upazila to another, according to the gazette.

People must stay at home during the period as the country is witnessing a growing number of deaths and coronavirus cases.