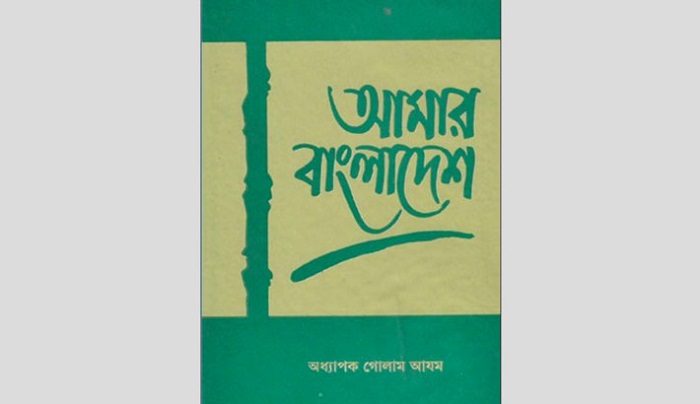 The sudden appearance of “Amar Bangladesh Party” (ABP) earlier this month in secular Bangladesh’s politics amid the Covid-19 crisis has surprised political observers as the party discreetly continues to hold the flag of convicted war criminal Ghulam Azam, the late leader of the fundamentalist Jamaat-e-Islami party.

Political analysts are unanimous that although in public the ABP or “My Bangladesh Party” has distanced itself from the Jamaat, but in reality it has just another face of the fundamentalist party which had collaborated with the Pakistani army during the country’s Liberation War in 1971.

Reliable sources said intelligence outfits are keeping a close eye on the new political group and their probe has confirmed the initial thoughts that the ABP is a new front of the Jamaat.

“Whatever it says about distancing itself from the Jamaat, it is nothing but new wine in old bottle,” an intelligence source told this correspondent, adding that it was in fact Golam Azam’s “new baby goat.”

“The ABP is named after Ghulam Azam’s book “Amar Bangladesh” (My Bangladesh) which was first published in July 1995 by Adhunik Press in Dhaka’s publishing heart of Bangla Bazar,” he pointed out.

The book is priced at Tk 80 and its writer is named as “Professor Golam Azam.”

An analyst said, “Jamaat is hard pressed now in Bangladesh’s politics as it cannot contest national elections and thus it is hoping to find some kind of acceptance in a crisis situation.”

Afsan Chowdhury, a noted writer and researcher, told the daily sun that “they are here because the government has other policies and priorities now and so they are trying to sneak in amidst all this.”

The ABP, comprising of those who either quit or were expelled from the Jamaat over the past years as it continued to lose political ground, suddenly announced its birth at a press conference in Dhaka on 2 May amid the coronavirus pandemic.

The move comes a year after the same group formed “The Jonoankhankar Party.”

AFM Sulaiman Chowdhury, a former government secretary and ex-member of Jamaat’s highest policymaking body Sura, is the convener, while Mojibur Rahman Monju, who was expelled and once led Jamaat’s student-wing Islami Chatra Shibir, as the member secretary with 222 members.

Barrister Abdur Razzak, self-exiled in London now, who was a former assistant general secretary is reportedly backing the ABP after quitting Jamaat-e-Islami in 2015.

“This is totally a party independent of Jamaat, but we will welcome others from different political groups,” he was quoted as saying by the local media.

However, the claim that the ABP is independent of the Jamaat has fallen flat because their secret allegiance to Jamaat’s late leader and convicted war criminal Ghulam Azam remains its ideological leader, according to a researcher.

He said it will try to keep both religion and the Liberation War out of debate as more such debates only makes Jamaat sink deeper into trouble over its 1971 role. That means their real faces get more exposed.

Ghulam Azam died a natural death in 2014 in jail as the High Court gave him life term instead of the death penalty because of his 92 age, but never sought forgiveness for the crimes he and his men carried out in 1971.

The Jamaat set up Al-Badr, Al-Shams and Razakar militias to kill and rape people as it collaborated with the Pakistani army which tried to suppress the Bengali war for an independent Bangladesh, the former East Pakistan.

After Prime Minister Sheikh Hasina and her Awami League-led coalition returned to power in a thumping victory in the 2008 general election, the Jamaat lost a legal battle to contest national polls. Since then, it has remained as BNP’s second fiddle.

Jamaat’s top leaders, except for Delwar Hossain Sayeedi serving life term for war crimes, have been executed after court battles reconfirmed that they were involved in crimes against humanity during the 1971 war.

The Jamaat-e-Islami came to power for the first time in 2001 as the closest ally of the opposition Bangladesh Nationalist Party (BNP) headed by Khaleda Zia, a former prime minister now serving time for corruption.

Two Jamaat leaders were made cabinet ministers in her government, triggering widespread protests from Bangladesh’s war veterans, martyrs’ families, students and most other people of this Muslim-majority South Asian country.