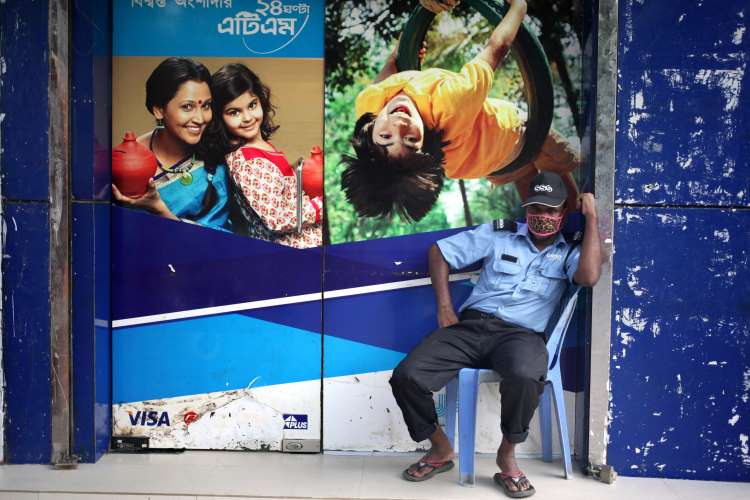 The security guards working for different establishments including ATM booths, corporate offices and residential buildings run the risk of coronavirus exposure as they continue to work braving the pandemic.

Frantic by the rise in the number of novel coronavirus infections and deaths across the country, they are, on the other hand, unable to fight shy of their duties.

Shariful Islam, a private bank ATM booth security, goes to work every day amid the risk of virus infection.

“Although I go very close to the customers to provide them with service, I have gotten an ordinary mask and a pair of gloves as protective gears. I am worried about my own safety.”

“Since the novel coronavirus is contagious, it can also pass from the client's body to my body. We are observing our duties risking our lives,” he added.

Abdullah, another security guard for an ATM booth, is concerned about his own safety as well as his family.

According to him, many people come here every day to collect money.

“If a virus transfers to my body from someone else, people of my house will also get infected. This is only my breadwinning job. If I had an alternative means of income, I would not have left the house.”

Like Sharif and Abdullah, everyday a large number of security guards are working amid the risk.

Due to the lack of adequate security, these workers who are in charge of the safety of others are now worried about their own safety as well, they said.

Like the members of the administration and law enforcement agencies, security personnel are acting as frontline fighters. But in real sense, they have no such protection system. That is why their risk is much higher.

He said although some protective measures are provided by the owners where the security personnel are stationed, but they are substandard and inadequate.

Many organisations ended up in giving them just an ordinary mask and some gloves, but that was at the beginning of corona outbreak.

“Therefore, I am calling for the inclusion of these security personnel into the rationing system that the government is talking about,” he added.

A significant number of security personnel are performing their duties at various bank branches and ATM booths.

Out of 59 banks listed in Bangladesh Bank, 51 are providing ATM services.

According to the data, till June last year, the number of ATM booths of all the banks in the country was 10,722. Most of ATM booths are located in city corporations and district towns, including in the capital.

Even if two security guards are at each ATM booth, there are more than 20,000 security personnel working to provide security for those booths.

Meanwhile, even though the bankers get the allowance due to risk, these security guards are not getting any kind of back pay even after working in the banking service.

It is learned that there was an objection from the bankers to provide services during the corona outbreak. Later, the central bank issued directive to provide incentives and risk allowances to the bankers due to the spread of virus.

According to the directive, after the announcement of general leave, the bank officers and employees who are physically working for 10 days will get an allowance equal to the basic salary for the whole month. If it is less, then they will get it at proportional rate.

Besides, the bankers will get Tk5-Tk10 lakh if ​​they are affected by corona due to duty, and five times if they die. In addition, the medical expenses will be fully borne by the bank.

Shah Alam Sarker said most of the security personnel were working at the bank's ATM booths. At the ATM booth, the security guard has to open the door at the time of entry and exit of the customers at the booth.

“Therefore, the risk of these security personnel is much higher.”

Besides, security personnel in residential areas and buildings are also working amid the same risks. Least protective measures have been provided to them.

Nur Ali, a security guard of a house, said “I have to do everything from shopping to home security. I have to receive parcel. I meet many people. The owner of the house did not do anything to keep me secure.”