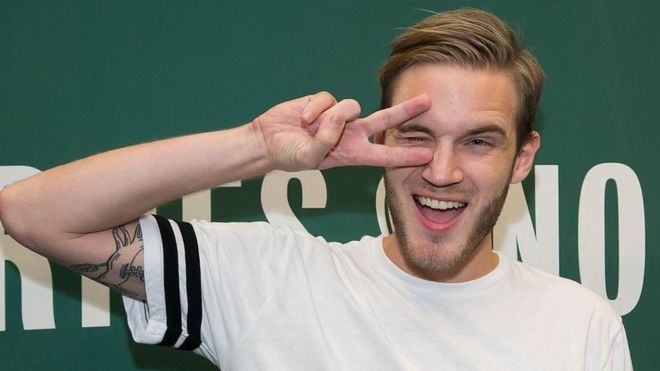 Videomaker PewDiePie has signed an exclusive deal to stream on YouTube.

PewDiePie, whose real name is Felix Kjellberg, had amassed over 100m followers in 2019 when he abruptly announced he was leaving the platform.

He said returning to YouTube was a "natural fit" as he looked for new ways to connect with fans.

The deal comes three years after YouTube, owned by Google, ended a separate deal with the video maker over anti-Semitic posts.

The 30-year old Swedish vlogger began posting videos on YouTube in 2010. They showed him playing and commenting on videogames he played.

He has particular success with his comedic reaction to horror games. From there he expanded out to videos on a wide range of topics including interactions with other YouTubers and his followers.

In 2019 PewDiePie announced he would no longer be making videos for YouTube and would instead create content exclusively for Dlive - a live-stream platform that promised better financial returns for its content creators. At the time PewDiePie said he was taking a break from YouTube because he was "feeling very tired".

Streaming wars
His return to YouTube comes as the video streaming giant battles with other platforms for popular video creators. Sites including Twitch and Mixer have been signing exclusive deals with live-stream gamers to boost audiences.

Earlier this year YouTube signed gamers Valkyrae, Muselk and LazarBeam to their platform.

In a statement, PewDiePie said live streaming was a big part of his decision to return to YouTube.

"Live streaming is something I'm focusing a lot on in 2020 and beyond, so to be able to partner with YouTube and be at the forefront of new product features is special and exciting for the future," he said.

Controversial comments
As PewDiePie's popularity has grown so has the controversy surrounding him.

In 2017, PewDiePie posted a series of videos that include Nazi imagery and anti-Semitic messages.

The posts caused him to lose deals with Disney Maker Studios and YouTube Red - the company's premium subscription platform. Being removed from YouTube Red meant he could still post videos to his YouTube channels but would earn less for adverting.

Later that year, he used the N-word during a live stream and praised a white-supremacist in a separate video. PewDiePie apologized for both incidents.

During an award speech in 2019, he pledged to give $50,000 (£40,177) to the Anti-Defamation League, a group that fights anti-Semitism and hate speech. But he later rescinded that promise saying he would instead donate to a charity he was "personally passionate about".

In a statement Google, YouTube's parent company, said PewDiePie's previous comments were "not in line with our values".

"Were he to violate our policies today, we'd take action accordingly just as we would with any other creator," a company spokesperson said.