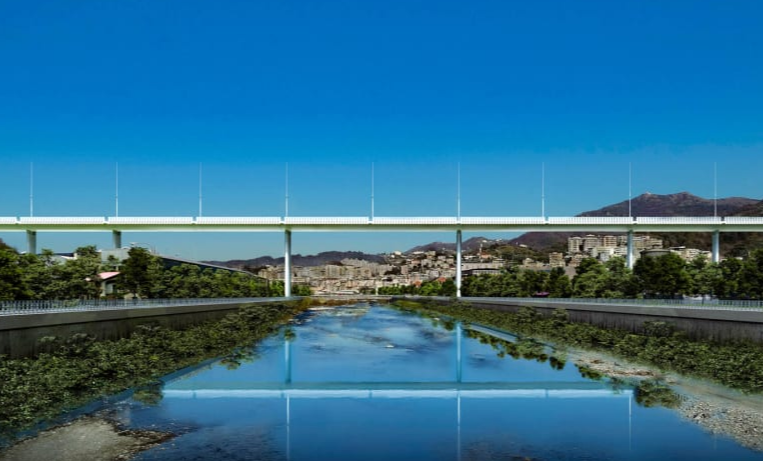 High above the Polcevera valley, the final section of a majestic new bridge was hoisted into place this week, signaling the imminent completion of a remarkable engineering project against seemingly impossible odds.
The bridge is a critical traffic artery for northern Italy.

It connects two sides of the city of Genoa and serves its busy mercantile port, while being part of the E80 European highway that links Italy to France. It's also on a main route used by holidaymakers heading to the Ligurian Riviera from cities like Turin and Milan.

More importantly, it was built on the scene of tragedy, replacing an earlier structure, the Morandi bridge, which collapsed on August 14, 2018, killing 43 people.

That the replacement has arrived less than two years after the disaster is something of an achievement.
It was constructed rapidly, in a country rarely considered an exemplar of efficiency. Some of the most challenging work was carried out amid Europe's worst coronavirus outbreak.

And yet, there it is. Over a kilometer long and standing 45 meters above the valley. Seen from below, it's designed to look like a ship floating in the sky.
"Genoa is a shipmaking city, so it's not bizarre to make the bottom of the bridge look like a ship's hull," Renzo Piano, who designed the new bridge, tells CNN Travel. It adds to a portfolio that includes the Shard in London, the Whitney Museum in New York and the Centre Pompidou in Paris. A Genoa native, Piano also worked on a bold redesign of the city's waterfront in the 1990s.

"I wanted this bridge to tell a story about Genoa," says Piano. "A famous Genoese poet, Giorgio Caproni, wrote beautifully that Genoa is made of steel and breeze. This bridge will be a portrait of the city. It's made of steel, but it's also flirting with the breeze. It will be flying over the valley. It will be strong and powerful, but simple, like a beautiful song."

In a ceremony limited in scope by the lockdown still enforced across the country, Italian premier Giuseppe Conte said that a wound was being closed, although one that can never fully heal. He added that Genoa was "shining a new light over Italy."
From his home in Paris, Renzo Piano watched with "a mix of pride, affection, sadness and a bit of melancholy, because the big adventure part of the project is done, the part when you take pieces of steel that weigh 2,000 tons and make them fly from the ground to a height."

The collapsed Morandi bridge, named after the engineer who designed it, Riccardo Morandi, was completed in 1967.
It had the same structure as the Brooklyn Bridge, which it vaguely resembled, but it was made mostly of concrete rather than steel, because Italy didn't have the required supply of the metal at the time.

The steel stays, or cables, that supported the deck were also covered in concrete, and the structure of the bridge was lacking any redundancies that could have prevented a collapse in case of failure.
When one of the main pylons fell during mid-morning traffic, it brought with it a section of road spanning 600 feet that crashed down on the railway and buildings below, leading to the evacuation of hundreds.

The exact cause of the collapse is still under investigation, but corrosion, construction defects, improper maintenance and a design that was beyond its load limits have all been identified as contributing factors.
Piano's new design does away with cables entirely. It's a streamlined steel beam supported by 18 reinforced concrete piers, spaced 160 feet apart except for the three central ones, where the gap widens to 320 feet because of the river and railway. The design is meant to reflect the character of the city itself.

"Genoa is a city of silence in some way, and this is what the bridge does: It goes through the valley in silence, putting its feet where it can, almost asking for permission. Maybe that's part of the inspiration, because when you have a tragedy, the first reaction must be silence."
Non-stop
The new bridge was built by Salini Impregilo, an Italian construction company, and Fincantieri, a state-owned shipbuilder. The project cost 200 million euros, about $220 million, not considering the cost of demolition of the Morandi bridge, which cost another 90 million euros, or about $98 million.

"Normally it would take three to three and a half years to design and build a bridge of this size. This one took a little over a year," says construction manager Stefano Mosconi, who added that up to 1,000 people were working on the project at the same time.
To speed things up, construction took place less than 20 meters south of the fallen bridge, so that it could start while the cleanup work was still in progress.