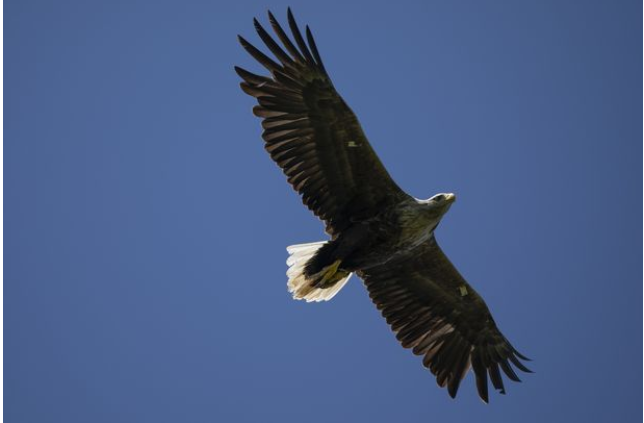 White-tailed eagles disappeared from ­English skies in 1780, but held on in Scotland until 1916.

Now these birds, which spend hours perched on a lookout before soaring to high altitudes, have made a comeback of late.

Also known as the fish eagle, they are the UK’s largest bird of prey with a wingspan of up to 2.5 metres.

They became extinct here early in the 20th century due to illegal killing.

But thanks to Forestry England and the Roy Dennis Wildlife Foundation, who are leading a project to reintroduce them, releasing a group on the Isle of Wight last year, they may become a more frequent sighting in the skies near you.

They are currently GPS tracking four young birds making their first big trips. During winter, they were ­sedentary, but with better weather they have flown from their nests to Somerset, Kent and Norfolk. Two brave birds, G318 and G393, have flown up as far north as Yorkshire
to roost.
Campaigners are appealing to people for sightings and photos. The birds have black-ridged tails, a hooked yellow beak and golden eyes with yellow legs and talons.

Evidence from the ­Netherlands, where there is a small but growing ­population of white-tailed eagles, shows that the species will readily nest in densely populated areas, close to people.

As a generalist predator, an animal that thrives in a wide variety of environments and scavenges on dead animals, white-tailed eagles favour fish in spring/summer, with water birds in autumn/winter, but also take rabbits and hares.
The introduction of sea eagles has not been welcomed by all, with some farmers fearful the eagles may attack their lambs.

An earlier plan to reintroduce eagles in Norfolk was rejected – with the potential dangers to livestock cited.

The Roy Dennis Foundation said: “They are known to explore widely in their first two years before returning to their natural area to breed. There’s a chance of seeing one wherever you live so keep looking up, but please stay home and stay safe.”