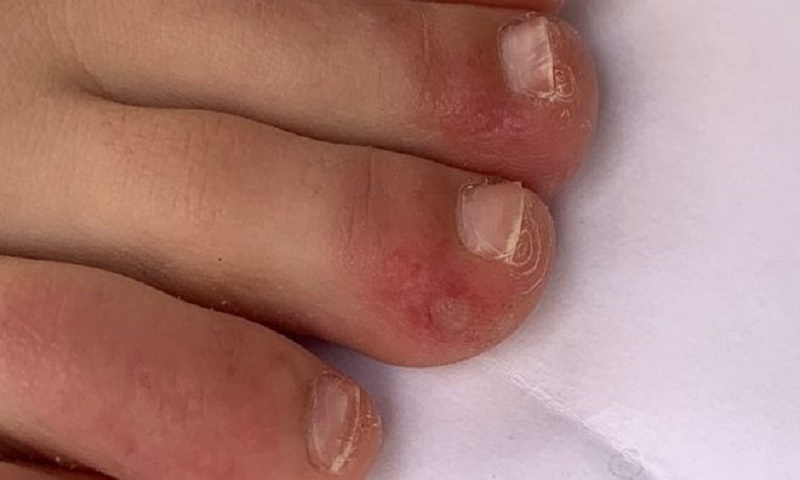 Five rashes, including Covid toe, are affecting some hospital patients diagnosed with Covid-19, a small study by Spanish doctors has found.

The rashes tended to appear in younger people and lasted several days.

It is not uncommon for a rash to be a symptom of a virus, such as the spots that indicate chicken pox.

But the researchers said they were surprised to see so many varieties of rash with Covid-19.

Rashes are not currently included in the list of symptoms of the illness.

All the patients in the study were already in hospital and had respiratory symptoms.

The peer-reviewed paper was published this week in the British Journal of Dermatology.

All dermatologists in Spain were asked to share details of Covid patients they had seen who had developed rashes in the previous two weeks. There were 375 in total.

The five rashes were:

1. Asymmetrical, chilblain-like lesions around the hands and feet, which could be itchy or painful. Generally found in younger patients, lasted on average 12 days, appeared later on in the course of the disease, and were associated with mild infections. Accounted for 19% of cases.

2. Outbreaks of small blisters, often itchy, found on the trunk and limbs. These were found in middle-aged patients, lasted around 10 days, and appeared before other symptoms. (9%)

3. Pink or white raised areas of skin that looked liked nettle rash, and often itchy. Mostly on the body but sometimes on the palms of the hands. (19%)

4. Maculopapules - small, flat and raised red bumps. These accounted for 47% of cases. They lasted around seven days and appeared at the same time as other symptoms but tended to be seen in patients with more severe infections.

5. Livedo (also known as necrosis) was present in 6% of cases. The skin looked blotchy red or blue, with a net-like pattern. It's a sign of poor blood circulation. This appeared in older patients with severe illness.