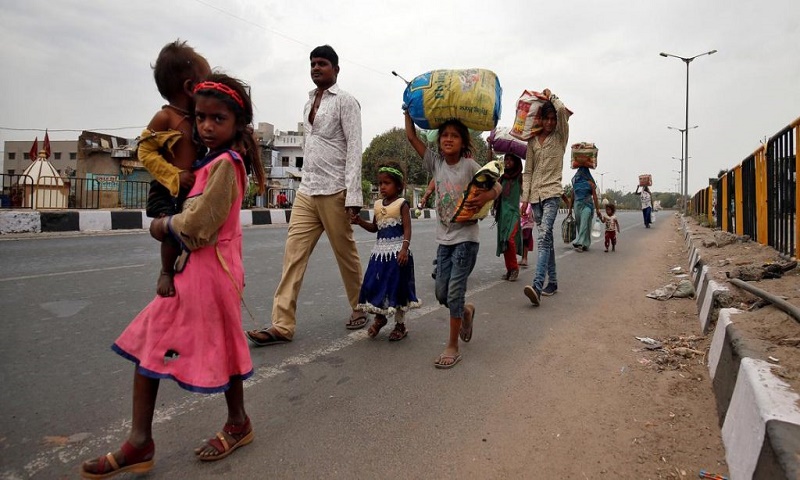 The on-going virus lockdown has exposed the plight countless workers who have no jobs, no savings and no social security. The lockdown has caused immense sufferings in the lives of the workers as their income disappeared instantly. The phenomenon has sparked an unprecedented mass migration of the hapless workers to their village homes. Hundreds of these workers started leaving Dhaka at a time when public transport on roads was banned. At the same time, water and rail travel was also suspended. Here is a heart breaking story of their difficult journey to their village homes.

Before the lockdown, Abdul Mazid, 40, used to work as a mason in Dhaka city. Hailing from Chapainawabganj district, he earned up to Tk 800 a day and sent most of his earnings home.

Both work and wages dried up after the Bangladesh authorities declared a total lockdown on April 7 to prevent the spread of coronavirus. On the day, Mazid took an instant decision to set for his village home. The shutting down of all transport meant that he was forced to travel on foot and sometimes by pedal-run rickshaw or rickshaw van on his way to Chapainawabganj. On several occasions he had to handover money to on-duty police or Ansar personnel during the difficult journey.

However, most of the time, Mazid had walked with macadam in his sandals in the rising heat. During the arduous journey, he had survived on water and biscuits. However, he was not alone. Hundreds of workers fled the locked down city of Dhaka and trekked home to their villages in various districts.

Sprawled together, all of them began their journeys. They carried their paltry belongings - usually food, water and clothes - in cheap rexine and cloth bags. The young men carried worn and shabby backpacks. They walked under the sun and under the stars. A large number of them said they had run out of money and were afraid they would starve. Clearly, a lockdown to stave off a pandemic had turned into a humanitarian crisis.

Before the lockdown, the streets of Dhaka remained abuzz with informal economic activity. The city was a microcosm of informal employment where hundreds of thousands migrate to from rural areas every year in search of jobs. People in the informal sector are a vital source of economic lifeline in our daily lives. These are autonomous, self-realised human beings generating economic output: hawkers, tea stall owners, phone top-up businesses, fish and vegetable vendors and day labourers.

As per sources at the Bangladesh Institute of Labour Studies (BILS), workers of the informal sector remain vulnerable as they are yet to be brought under the purview of law. As to why, people employed in this sector are deprived of benefits and social protection in absence of employment contracts. Presently, nearly 88.5 per cent workers are employed in the informal sector. In Bangladesh the sector has come to have a unique significance as a driver of economic growth where job opportunities are severely lacking and human development lags behind.

Escaping poverty in their villages, most of the informal sector workers live in squalid housing in congested Dhaka ghettos and aspire for upward mobility. But, the lockdown had turned them into refugees overnight. Their workplaces were shut, and most employees and contractors who paid them vanished. Hundreds of workers desperately tried to return homes in their villages.

Wanting to go home in a crisis is natural. If Bangladeshi students, tourists and pilgrims stranded overseas want to return, so do labourers in big cities. They also wanted to go home to their villages. Finally, battling hunger and fatigue, they got back to where they belong. Home in the village ensures food and the comfort of their families. Social security of these workers lies in their villages, where they have assured food and accommodation. With work coming to a halt and jobs gone, they now look for social security and returned home.

However, what is alarming is that the fleeing workers might have carried coronavirus with them, thereby spreading it. Hundreds of workers who eventually reached home, either on foot or by rickshaw vans or other means moved into their joint family homes, often with ageing parents. Sixty-five districts could turn out to be potential hotspots as hundreds of workers returned home. They need to be tested for the virus, and isolate infected people in local facilities. The safety and health of our workers is paramount today. In the face of an infectious disease outbreak, how we protect our workers now clearly dictates how safe our communities are, as this pandemic evolves. We firmly believe the administration is responsive enough to the safety and health of the workers. At the same time, it is well-aware about the plight of these workers who are in financial distress.

Being the Mother of Humanity, Prime Minister Sheikh Hasina has stood beside the hapless workers. She has already announced Tk 760 crore assistance for the informal sector workers facing unemployment due to on-going public holiday observed to tackle coronavirus spread. Her announcement came during her nationwide address on the eve of Pahela Baishakh, the first day of the Bangla calendar year 1427. She gave a necessary directive to make lists of day labourers, rickshaw and van pullers, motor workers, construction workers, newspaper hawkers, hotel and restaurant workers who became jobless due to the long vacation. They will be given one-time cash assistance once the lists along with their bank accounts are completed, she has observed. She also asked for fair disbursement of the government assistance to each and every needy worker. We believe no genuine worker will be left out of the benefit. None will be deprived of the official assistance. Being the driving force behind every product or service produced, workers are always close to the heart of the Prime Minister. We believe that in the coming days too she will remain beside the workers as the virus lockdown has exposed their plight. Finally, let me conclude here by quoting one of her valuable statements. This is: "One of our goals is to protect the interest and ensure the welfare of the working class people who are contributing directly to production and development of the country.”