They don’t care about lockdown 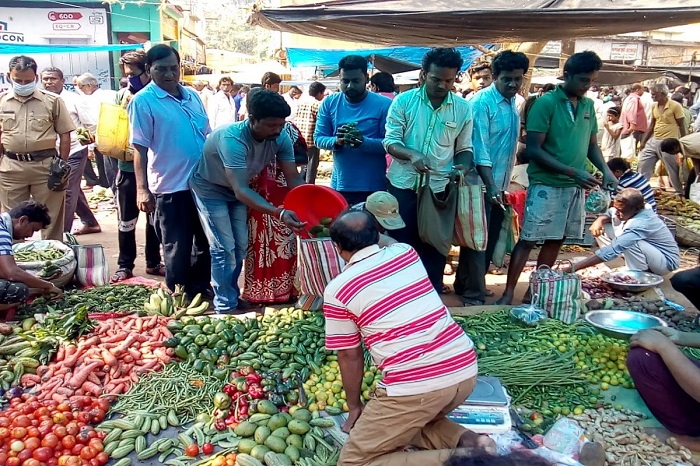 From rural agoras to exurbs in upazilas, district headquarters to capital Dhaka, people appear to not give a damn to the lockdown, thus running the risk of Covid infection.

In droves, they are coming out of their residents and taking to the streets, raising the fear of comprehensive spread of the novel coronavirus.

In the capital, commoners, mostly lower-income groups, largely are taking to the streets in the capital, braving the coronavirus pandemic.

In some thoroughfares including Badda, Natunbazar, Gulshan, Jatrabari and Mirpur also witnessed partial traffic congestion.
Like the previous days, law enforcers were not seen in action mood to intercept the traffic in the capital.
Due to such a virtual dilly-dallying attitude by the law enforcers, a large number of city-dwellers, mostly lower-income groups, dare to ignore the virus pandemic as well as the lockdown, many pointed out.

People flocked to the streets, markets and tea-stalls as soon as the patrolling law enforcers left while many came out for relief items.
People thronged the local markets while many were gossiping at tea stalls in many areas.
The imposition of total lockdown in many of the affected areas in the capital has also been lax.

Police said they were trying to enforce the lockdown regulations, but people often ignore their request and instructions.
Many were seen roaming around Kataban, Farmnate, Karwan Bazar, Green Road, Palashi area, defying lockdown instructions and most of them give a common excuse of going to hospitals or pharmacies.
Some said they had to walk as no mode of transport is available.

Since the general holiday was announced on March 25, Dhaka has been putting more emphasis on the "stay home" approach to fight the coronavirus pandemic.
Major areas of Dhaka and Chattogram cities and more than 27 districts in the country have already been brought under partial lockdown after detecting coronavirus cases.

The authorities are struggling to get people off the streets as Covid-19 is spreading from one place to another amid the extended shutdown till May 5.
Dhaka and neighbouring Narayanganj are identified by the IEDCR as the most vulnerable and affected areas while around 70 roads and neighbourhoods in the capital are already under lockdown.

Law enforcers, however, complained that unnecessary gatherings and public movements in the morning in alleyways and in the kitchen markets were the cause of concerns.

Deputy Commissioner (media) Masudur Rahman said people in the affected areas are not following lockdown instructions and the lawmen had to keep patrolling the areas to enforce them.

Thousands of garment workers have been returning to the capital and industrial belt Gazipur from their native homes to join their workplace for the last few days.

Workers are also seen coming towards Dhaka and Gazipur from different districts. Some are coming on foot as the readymade garment (RMG) factories are partially open on Sunday amid the nationwide shutdown.
Mostly low-income people, a large chunk of which are workers in the RMG industry, swarmed the Dhaka-Aricha and Nabinagar-Chandra highways since Saturday morning.

The influx of workers, desperate to reach the factories permitted to resume operation, was seen a day after Home Minister Asaduzzaman Khan said none would be allowed to enter the capital from outside for work.
In the absence of public transport, they travelled by pickup vans and battery-run autorickshaws, paying two to three times the usual fare to reach their workplaces.

After a meeting with the garment factory owners on Tuesday, the home boss said the garment workers would not be allowed to enter the capital from outside as apparel factories would run on a limited scale with workers now staying in the city.

Health experts say the move to reopen factories, mostly garment units, will increase the risk of wider transmission of the virus unless proper health safety measures and social distancing are ensured at workplaces and on their way to and from homes.

On Wednesday, two ferry terminals at Shimulia-Kathalbari and Paturia-Dauladia became crowded with hundreds of workers desperate to reach Dhaka and other areas from south-western districts.

Police personnel were there but it was not possible for them to intercept such a huge number of people, he pointed out.
Now seven ferries are transporting vehicles carrying goods and vehicles for emergency services a day. Usually, 15 to 17 ferries ply the route, he added.

A BIWTC staffer at Shimulia terminal said the number of people crossing the river rose sharply over the last three days.