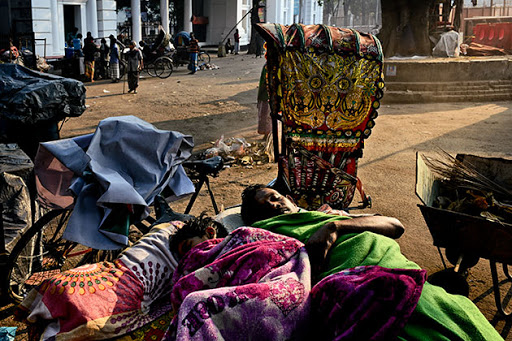 While measures are underway to contain the spread of coronavirus by asking the city residents to stay indoors, there is no tangible step for those living on the streets.

Health experts say the unsafe dynamics of the livelihoods of these people run the risk of transmission of the deadly virus.

They suggested that the government accommodate them temporarily into different educational institutions until open.

The street people live beside roads and highways and converge on places unmasked, huddling together to get food and relief goods when distributed.

‘Social distancing’ makes no sense to them.

Since the authorities concerned did not arrange accommodation for them, they are just living as they do.

The street children have been seen playing in groups at railway stations, on railway lines, in parks and vacant streets and other spots.

A street child Shahin, who lives at Kamalapur Railway Station, and who also works as a coolie, told this correspondent they have no work; they collect food and relief at day time together and sleep together there at night.

When he was asked whether anybody provided them with masks, soaps, hand sanitizers and other safety things, he replied in the negative.

On the virus, he said: “We have heard that a disease is infecting people. We have no work and food.”

Palash, another street child, who lives with Shahin, said: “No disease can infect us.”

Hosne Ara, who was found sitting with her autistic son at Moghbazar, said she sleeps along with some others on an over-bridge.

“We have heard that foreigners have brought a disease. For which, everything has been closed,”

“None has arranged accommodation for us. And none provided us with masks and other things. So, we live as we did before,” she said.

It was around 8:30pm on Tuesday. A man and woman were sitting at Kuril Biswa Road. Asked, they said they were waiting for relief.

In response to a question, they said sometimes affluent people provide relief goods at night.

Asked where they pass the night, they replied that they sleep on footpath with others. If it rains, they sleep in front of shopping malls or convenient places on the roads.

On the virus, they have said they are poor. And they have no disease. When asked if anybody arranged accommodation and masks for them, they said “no”.

Abdullah Al Mamun, director of Save the Children, Bangladesh, said the street children are in a high risk of being infected with the virus.

“The children may be bearer of the virus as they live in a body. The government should coordinate with the NGOs to take special safety measures for them.”

He thinks the educational institutions can be the accommodation for them at this moment as these remain closed.

Prof Doctor Mohammad Mozaherul Haque, former adviser of World Health Organisation’s Southeast Asia region, said the risk of infection is increasing among street people as they live in a crowded environment and take no safety measures.

The government and NGOs should stand by them to save them and save the whole country from the virus as their infection may cause rapid transmission.