Coronavirus tattoo for everyday of lockdown 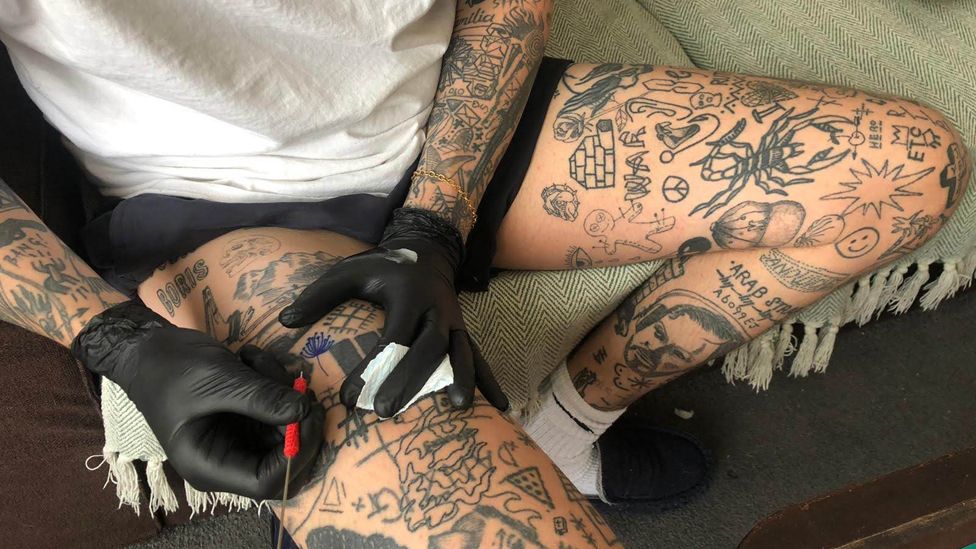 Sitting on the sofa in his flat in Walthamstow, north-east London, with his dog Pingu by his side, Chris Woodhead is trying to find space to add another tattoo to his already crowded body.

There is little unmarked skin left - from the tips of his fingers to the soles of his feet, almost every inch is covered in a vast jumble of tattoos of different styles. A pair of dice have fallen just before the toes of his right foot begin, a scorpion extends down his inner thigh, there's a leaning palm tree, a swordfish arching around a love-heart, and a voodoo doll floats above some ripe, glossy cherries.

Chris has been regularly getting tattoos since turning 18, some 15 years ago. Growing up, he was obsessed with the tattoo-heavy US punk music scene, and later discovered Duncan X, an icon of British tattooing who popularised a style using only bold, black ink to draw contemporary illustrations.

"Duncan X tattooed me when I was about 19," Chris says. "And then my best friend started tattooing and he used me as a canvas - he did more than 400 on me."

At the beginning of the lockdown, Chris had around 1,000 designs on his body. Now he has 40 more and counting. When the east London tattoo studio where he works as an artist closed in the lockdown, he went into isolation with his pregnant wife, Ema, and decided to add one new tattoo per day for as long as it continued.

"I found myself pottering around, not knowing what to do and eating all the food in the cupboards," Chris says. "So the idea of tattooing myself every day was to give myself a bit of direction. Without structure people are at a complete loss."

Each afternoon between 2pm and 4pm, Chris sits down to sketch designs inspired by his current situation. Then, once he's made a cup of tea, he puts ink in a pot and unwraps a needle. He's ready to transfer his drawing indelibly to his skin.

"I find tattooing therapeutic anyway. Right now I'm drawing what's on my mind," he says. "And there's not much else going through my mind at the moment apart from this monumental crisis."


Tattoo reading "When will it end?" on the sole of Chris's foot.
On the creased skin of the sole of his left foot, Chris has written the words, "WHEN WILL IT END?" At the very bottom of his right leg there's a spherical Coronavirus particle. On his sternum - a place where it "feels like you're going straight into the bone" - Chris withstood the pain to tattoo his own homage to the National Health Service.

"The thing I find so deeply sad is that it's taken this situation for people to truly appreciate the NHS, and to realise that their jobs are incredibly hard," he says.

For his 12th daily lockdown tattoo, Chris added a leaping tiger to his body in tribute to Joe "Exotic" Maldonado-Passage - the star of the Netflix docu-series Tiger King, a lockdown hit that he and Ema had just finished watching.

A week later he was inspired by the birth of a niece to tattoo the logo of Japanese mayonnaise manufacturer Kewpie, a cute wide-eyed baby. And on day 23 Chris inked an image of a sperm, swimming across his upper arm, a reference to the child that Ema and he will have in July.

Chris uses a low-tech tattooing technique known as hand poking in which a hand-held needle is used to push ink deep into the skin, without the use of electricity. The method is gaining popularity, he says, because it's much less intrusive and painful than getting a tattoo with a tattoo gun.
"It's like you have a quill that you dip into a pot of ink, but you're only able to dot it into the skin," Chris says. "It's really, really difficult to be precise - each dot matters - and it takes quite a lot longer than working with a tattoo gun."

But he's also mindful that he must save a space on his body to tattoo the name of his new child when it arrives. So he's been calculating how much tattoo-less skin he has left to continue his lockdown project.

"I want them to be good tattoos, so to try to keep them exciting, realistically, I've probably got a month's worth of tattoo space left," Chris says.

"If I'm truly honest, I look ridiculous - I look like a piece of blue cheese. There is very little space left that I can actually reach."