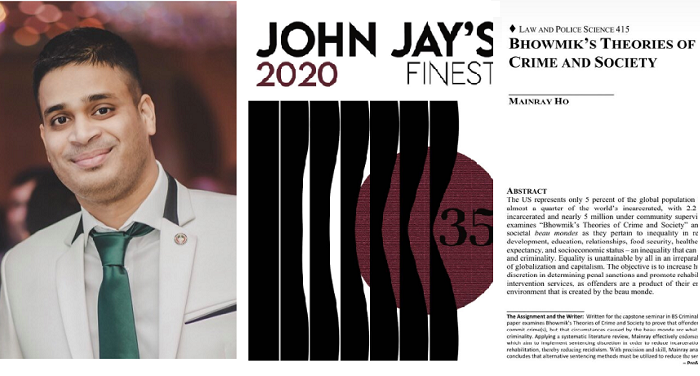 The ‘John Jay Finest’ journal has published new theories of crime and society developed by Dr. Rajub Bhowmik. His student Mainray Ho, who is pursuing criminal justice degree at the John Jay College of the City University of New York examined Bhowmik’s Theories of Crime and Society to prove that offenders do not intentionally commit crime(s), but that circumstances caused by the beau monde are what motivate crimes and criminality.

Applying a systematic literature review, Mainray effectively endorses Bhowmik’s theories, which aim to implement sentencing discretion in order to reduce incarceration rates and promote rehabilitation, thereby reducing recidivism. With precision and skill, Mainray analyzes each theory and concludes that alternative sentencing methods must be utilized to reduce the sentencing rate.

Rajub Bhowmik, a criminologist and a faculty member of the Criminal Justice, Law, and Police Science at the John Jay College of the City University of New York has developed three theories of crime and society; they are the following:

Theory One— No one is equal to another, no will think equal to one despite all the societal changes.

Theory Two—One must adapt in a society regardless of the distribution of resources. Humans are driven by the desire to be equal, which is often controlled by the Beau Monde.

Theory Three—The Lack of resources (caused by Beau Monde) is responsibel for all crimes and criminal behavior, and it is an irreparable broken cycle of society.

The purpose of these theories is not for Dr. Rajub Bhowmik to be judge, jury, and executioner, nor is he advocating for socialism – which has historically failed. What is being advocated for is consciousness and discretion of jurors, judges, prosecutors, defense attorneys, employers, and ultimately the public, in underscoring the causation of crimes – not merely the crime itself or the penal sanctions that follow. The unequal distribution of resources, marketing ploys by the beau monde in controlling the desires and actions of the general population, societal norms, and the inclusivity of individuals affect the decisions people make to then adapt to their environment.

According to these theories, individual actions are based not on rational choice, but by circumstances they are in. Equality seeks to provide everyone the same amount of resources, while equity seeks to provide everyone with what they need. According to the theories, inequality will always exist. An increase in social consciousness, utilization of discretion, investments in early intervention and rehabilitation, and more in-depth research and analysis of social pathology, we can work towards increasing equity based on the needs of each person.